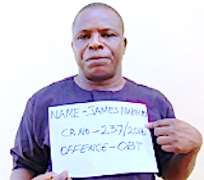 The convict who was Granted bail during the trial jumped bail but Justice Akintayo Aluko convicted him in absentia.

The Court ordered the Economic and Financial Crimes Commission, (EFCC) Enugu Zonal Office to re-arrest and produce Nwokpo for sentencing.

Nwokpo was convicted by the court on two counts bordering on obtaining by false pretences to the tune of N5, 695.000.00 (Five Million Six Hundred and Ninety Five Thousand Naira only), an offence contrary to Section 1(1)(a) of the Advance Fee Fraud and Other Fraud Related Offences Act 2006 and punishable under section 1(3) of the same Act.

The petitioner had alleged that sometime in 2014, one Francis Emeka introduced him to Nwokpo, who was the MD/CEO of Jata Gas Nigeria Limited for the purpose of supplying him Automated Gas Oil (AGO) and Petroleum Motor Spirit (PMS) and despite the payment of the said sum, the products were never supplied nor money returned to him.

Investigation carried out by the Commission revealed that the complainant paid the total sum of N5.6million to the convict’s Diamond Bank account.

It was further discovered that the convict's claim of losing over N129 000, 000(One Hundred and Twenty Nine Million Naira only), which was his excuse for not supplying the products, was false.

It was also discovered that neither Nwokpo nor his company, Jata Gas Nigeria Ltd was registered nor licensed by the Department for Petroleum Resources (DPR) to deal in petroleum products.

In the course of trial, the convict jumped bail, prompting the prosecution team led by Adaka Ekwu to apply for a bench warrant and trial of the convict which the court granted.

Three witnesses were called by EFCC after which it closed its case while applying for sentencing of the convict.

In his judgment, Justice Aluko held that the prosecution has proved its case and convicted the defendant in absentia and ordered his re-arrest.