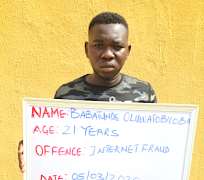 The Ilorin Zonal Office of the Economic and Financial Crimes Commission, (EFCC) today secured the conviction of Babatunde Oluwatobiloba, who was charged on one-count charge bordering on internet fraud.

Oluwatobiloba was convicted by Justice Sikiru Oyinloye of the Kwara State High Court sitting in Ilorin, after he found him guilty of the charge levelled against him.

The charge read: "That you, Babatunde Oluwatobiloba, (Alias: Joh Smith), sometime in October 2018, in Ilorin, within the jurisdiction of this honorable court did cheat by deceiving one Trey when you fraudulently induced her to send you $300(dollars) gift by portraying yourself as a white male, named John Smith" via your email address [email protected] , a representation you knew to be false and thereby committed an offence contrary to Section 320 of the Penal Code and punishable under section 322 of the same law"

When the matter was called on Tuesday, prosecuting counsel, O.B Akinsola prayed the court to allow her read the charge to the defendant for him to take his plea.

After listening to the offence leveled against him, the defendant pleaded guilty to the charge.

Delivering judgment on the matter, Justice Oyinloye said: " I have carefully considered the plea of the defendant and the evidence of the prosecution, the testimonies of the PW1 was not challenged nor controverted by the defendant even when he had an opportunity to do so"

"This honourable court hereby found you, Babatunde Oluwatobiloba guilty of the offence brought against you "

Justice Oyinloye ordered the convict to pay a fine of N100,000( One Hundred Thousand Naira only) and undertake one month Community Service.