Is Jesus Christ For Sale In Nigeria? 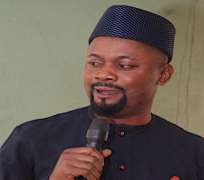 As long as you keep a person down, some part of you has to be down, so it means you cannot soar as you otherwise might. This is the situation with the preachers of today. Christ visited this planet earth some years back and left an indelible step worthy of emulation. He preached the gospel of truth and love. Jesus history made a new calendar which we call the Christian era. He never established any ritualistic worship. He knows that men can be baptized, partake of the Eucharist, support the clergy, observe the Sabbath, make long prayers and be sensual and sinful.

Jesus Christ bore our infirmities. He knew the error of men. Despised and reject of men, returning blessing for cursing, He taught morals the opposite of themselves, even the true nature of God. When error (heresy) felt the power of TRUTH (knowledge) the scourge and the cross awaited the great teacher. What a great life of a great man! Men did not understand Him due to their attachment to material belief which is slow to acknowledge what the spiritual fact implies. The truth is the center of all religion it commands sure entrance into the realm of love.

If my friends are going to Europe, while I am enroute for California, we are not journeying together. Being in profound sympathy with error of materialism some modern and worldly preachers are at the beck and call of falsehood and illusion. They are like travelers going westward for a pleasure –trip.

In Nigeria today being born again has become a modern industry that has accommodated neo-paganistic creed and preaching. Yet corruption and other related evils are on daily increase. A look at the religious terrain in this country reveals a very high degree of religiosity whose spirituality is at best questionable. Every available space in people’s houses, ears, implements of work, purses and covers of bibles are covered with stickers of seeming spiritual statements ranging from personal attunes to the spirit –world to indications of a quest for personal protection from the devil and evil men and women. In some cases they invoke direct “Prayer” for divine attack on supposed physical (i.e. human) enemies and in some extreme cases a wish that such “enemies” were dead. Examples of such stickers or statements include: “I am covered in the Blood of Jesus” “Holy Ghost Zoon keep off”, “Holy Ghost Fire”, “No Power directed against me shall prosper”, “Back to Sender”, “I bind every Spirit of Failure in my life”, “Attack those who attack me” to mention but a few.

The reason for this state of affairs could be traced to uncertainty experienced in Nigeria during the war years, 1967 -1970; thereafter, came the dictatorial regimes of the military, especially those of Babangida and Abacha. Those periods brought to Nigerians more concretely the Gospel message; Be prepared for you know not the hour the Son of man will come –Matt. 24:44. The end of the war did not bring to an end this serving God (satisfying the spirit) and serving mammon (satisfying the flesh) syndrome. The effect of the effort at personal survival saw the very first scandalous examination malpractice in Nigeria “EXPO 70” as eventually put into High life beat by the late Oliver De Coque.

One of our contemporary Scholars Onah gives six reasons for the proliferation of churches. These include religious enthusiasm, commercialization or “quick money”, quest for social status, frustration, inability to adhere to doctrines and or dogma and scandal. In addition to Onah’s view, I wish to state that ignorance of the true nature of God is also responsible for this. Shakespeare says, “There is no darkness, but ignorance”. In fact, nothing is worse than active ignorance noticed today in some churches. Thomas Aquinas says, “No more, where ignorance is bliss, it’s folly to be wise” for Confucius, “Ignorance is the might of the mind, but a might without moon or star.” The Bible enthuses, “My people are destroyed for lack of knowledge…”

Those who brought Pentecostal idea meant well for humanity. When the fire of God’s word was revived in some orthodox groups then, and their members refused to bow to authority to be beaten into line (status quo), they equally refused ejection from the churches; the churches consequently modified their position. Today there is Catholic Charismatic Renewal in the Romans Catholic church, Evangelical Fellowship in the Anglican Communion, and Methodist Evangelical Team in Methodist Church. They all share many things in common with the classical Pentecostal groups. Like Albert Einstein would say, “Anyone who doesn’t take truth seriously in small matters cannot be trusted in large ones either”. Our case in this context is that, the type of Christianity practiced by many in this country is used to canonize tribalism, xenophobia, sectionalism, greed and galloping avarice. We have failed God! All have sinned again! Jesus is placed on various modern alters for sale.

In Nigerian context, Karl Mark’s theory can easily be forgiven. He arrived at his conclusions after rightly observing that religion in history (and to a great extent today) has been variously employed for the maximal exploitation of the weak, the powerless, the peasants, the hoipolloi, the anawim, and the poor in whatever shape or configuration they appeared in history.

Humanity seems not to have changed much. It is still obvious that some leaders of churches have been fleecing their flock, arrantly milking and feeding them off, without an ounce of conscience. Consequently, the booming and mushrooming of many ministries and shades in the Christian bloc today, has more of a pecuniary base than the desire to do God’s will. Otherwise, how do we justify the activities of the modern native doctors hitherto masquerading as Pastors and Evangelist, who end up calling Tele-phone numbers of many via occult powers? Some of them will tell you everything you have done in life as prophesy, but this is done through psychic invasion into one’s psychic space or through the use of occultic materials.

Majority who do all these are workers of iniquity. Christ had warned, “Beware of false prophets, which come to you in sheep’s clothing, but inwardly they are ravening wolves” Matt.7:15. Today the number of prophecies you receive will determine the amount of money you will pay. Olive oil and other anointed oils are all modern ways of exploiting some people. Compelling people to show seed of faith and determining the amount of money to pay by the priest is a sure way to “modern righteousness and obedience to God’s voice”-oh what a heresy! Gathering people together under one uncompleted building and picking their pockets with mass hypnotism, mesmerisms, alleluia gravitated hysteria, all in Jesus name, has today become a national industry. Agwunsi and Amadiohia Pentecostal ministries are here and there. Yes, the Nose and God’s Anus Fellowship is everywhere, yet the behavioral bearings of our people remain suspect.