Gov. Obaseki Faces Another Hurdle In PDP As Imasuangbon Vows Not To Step Down 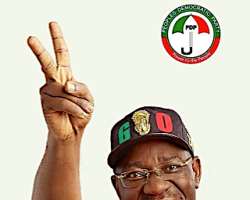 Having scaled the screening of the Peoples’ Democratic Party, PDP, to contest for the party’s governorship ticket on June 25, Governor Godwin Obaseki of Edo State has fresh hurdles to scale in the party.

The first is winning the party’s ticket, the second is getting majority of the PDP family in Edo to buy into his quest of running with his deputy, Philip Shaibu, while the third is to calm frayed nerves of some Edo PDP stakeholders who are bitter that Obaseki is pushing them aside and out of reckoning.

Obaseki and Shaibu resigned from the All Progressives Congress, APC, after the governor was disqualified from the party’s governorship primary.

He defected to the PDP on Friday and was granted waiver by the National Working Committee, NWC, to contest PDP’s primary after screening him on Saturday. However, reading meanings into Obaseki’s speech while defecting on Friday that he is now the leader of the PDP, some stakeholders said the comment was not discreet and has cast the governor as a dictator. This came as PDP governors and Obaseki Mandate Forum assured Obaseki, Shaibu and their supporters who joined the party on Friday, of accommodation and level playing field.

The Governor Aminu Waziri Tambuwal-led PDP Governors’ Forum also wished Obaseki God’s blessings and guidance as he subjects himself to the forthcoming primary of the party. The PDP Governors Forum, in a statement by its Director-General, Hon. C.I.D. Maduabum, described Obaseki’s entry into PDP as a homecoming to a democratic platform that accommodates all Nigerians desirous of good governance, accountability and deepening of democratic tenets.

“We welcome you to the PDP Governors’ Forum under the leadership of His Excellency, Rt. Hon Aminu Waziri Tambuwal, CFR and all other PDP Governors in the Forum. Your entry into the PDP family is a homecoming to a democratic platform that accommodates all Nigerians desirous of good governance, accountability and deepening of democratic tenets. “The PDP Governors welcome you to use the PDP as a vehicle to enthrone rapid economic, social and infrastructural development of Edo State. As you subject yourself to the forthcoming primaries of the party, we wish you success and God’s blessings and guidance.

“The Forum extends the solidarity and support of your colleagues to you and all of your teeming followers into the party and assures you all of accommodation and level playing field,” the statement read In the same vein, the Obaseki Mandate Forum congratulated Obaseki and Shaibu for taking a bold step of quitting APC for the PDP. National chairman of the forum, Chief Nathaniel Momoh, said the group considered Obaseki’s defection as one “that was long in coming, following the poor handling of his aspiration by the Adams Oshiomhole-led APC. “We believe this is a positive step in the right direction and a clarion call on members of the forum to double our efforts to ensure his victory at the poll.” Disquiet over Obaseki’s defection However, some entrenched forces in Edo appear bitter over how Governor Obaseki was accepted into the party.

Obaseki was received by Edo PDP Chairman, Dr Tony Aziegbemi, in a carnival-like atmosphere in Benin last Friday. Some members are claiming they were not carried along and have expressed reservations over how the defection happened, especially the governor’s remarks. After receiving the PDP membership form, Obaseki said: “I know that upon taking up membership of this party, I automatically become the leader of the party in the state. That is the constitution; I read it thoroughly last night (Thursday). “I want to assure all of you that I am prepared to provide leadership. I am prepared to provide a leadership that will lead this party to victory and I am prepared to provide a leadership that will not only put PDP in office in Edo State but as the ruling party in Edo State.”

“One of the aggrieved stakeholders picked holes in the comment.““What he said was very revealing and disturbing. Who joins a party and automatically becomes the leader? Even if that is what will be, Obaseki should have been more discreet. It shows he is coming to the party to displace those who have worked for years to build the structure. “He is going to plant his people everywhere, thereby suffocating those who have toiled for the party even in opposition,” he lamented.“Another stakeholder added: “It is just about him and his ambition. It is not about the party structure. He simply wants to use our platform to fulfil his ambition and move on.

This is a great danger that will boomerang for the party.” Fearing that the development might hurt existing cohesion in the PDP, which under the leadership of immediate past chairman, Dan Orbih, won four of the nine House of Representatives slots at the last National Assembly elections, two of the three senatorial seats and did well in the 2016 governorship poll, despite facing a ruling party with federal machinery, a stakeholder said it was not yet late to make amends. “So, to give Obaseki the impression he is coming to help us is false because if not for federal power, PDP routed APC in 2016. Rather, he is the one that needs us.

The notion that he is a big fish is just nothing but guesswork,” he said. Indeed, PDP leaders and Obaseki are expected to ensure that the rough edges are smoothed as the growing disquiet may affect the party’s chances at the poll if long-standing members feel sidelined and unappreciated. READ ALSO: APC crisis gets messier as Oyegun asks Buhari, govs to save democracy Many of them, sources said, may not work for the PDP in the September 19 governorship poll. One of the party members said: “Our party feels we will just win by fielding Obaseki as a sitting governor but it is not true. Look, APC knew why they rejected him. He hasn’t sorted out his qualifications issue. Supposing he even manages to win, do you think the APC won’t cash in on that to file suits against him? Where will that leave us as party members and stakeholders?”

Thank God for the position of Benin monarch, Oba Ewuare II, who said he needs peace to prevail and that there should be no godfatherism. “It is not about pressure but about doing the right thing in line with the constitution of the Federal Republic of Nigeria, due process and the Electoral Act. According to him: “It is disappointing and a big shame in Edo state and the entire nation and it portends danger for the country and the party. Nigerians should rise up against what is happening, we are not in the jungle, it is no do or die affair but about the process. It is totally unacceptable. Vanguard