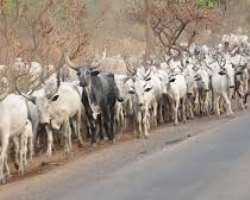 Not fewer than five villagers suspected to be herdsmen were Saturday killed when members of Boko Haram sect armed with AK47 rifles invaded communities of Moduri, Kelewa and Ngudori of Magumeri Local Government area of Borno State.

The terrorists carted away 480 cows after committing the atrocities, leaving one of the herdsmen in the pool of his blood as a result of gunshots.

It was however gathered that the victims were killed while attempting to plead with the terrorists not to go with their cows, which is the only means of their livelihoods

Moduri is about 15 km east of Magumeri Local Government Headquarters, while Kelewa and Ngudori are east and about 20 kms.

The Secretary while giving an update on the attacks said, the insurgents first stormed Moduri village at about 6:30pm on Saturday and rustled 300 cattle before killing three persons, after which, the same set of terrorists invaded Kelewa and killed one person before they went away with 80 cows including looting of foodstuffs.

Kyari said, the injured one has been evacuated to the State Specialists Hospital in Maiduguri and is now receiving treatment to be paid by the Council.

He added that in Ngudori village, the insurgents carted away 100 cows after killing one person.

His words: "We are terrified with renewed Boko Haram attacks in my communities.

"Just yesterday (Saturday), some group of terrorists invaded Moduri village in the evening and carted away with 300 cows after killing 3 persons.

"Likewise, the insurgents did not stop there as they went to Kelewa village and killed one person before they rustled 80 cows, while in Ngudori village, 100 cows were also carted away after killing one person". Kyari lamented.

He appealed to the security agencies to redouble their efforts in the fight against Boko Haram renewed attacks which is posing serious danger and frightening farmers, especially Internally Displaces Persons (IDPs) who have the resilience and went back to their liberated communities eager to go to farm for their livelihoods.