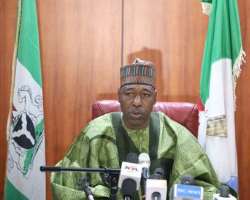 He added that the state government was also constructing additional Vocational Enterprise Training Centers in 3 other locations in the 3 Senatorial zones of the state to serve as vocational training hub of school drop-outs and unemployed youths willing to enageg in entrepreneurship schemes. Commissioner of Science, Technology and Innovation

Dr. Engineer Malumbe who stated this Sunday at the inter ministerial press briefing held at the Multi purpose hall of the Government House Maiduguri said the ministry further provided science and technology equipments and facilities to science and technical schools across the state.

He also noted that plans are underway to standardize all the 9 technical schools located in different parts of the state to boost science and technology while the ministry iniaitetd and created a Job Portal within a period of one month after it's creation 10 months ago to provide opportunity for job seekers and recruitments agencies to have comprehensive list of data base of job seekers and their opportunities.

The commissioner added that plans are in pipeline to provide a master plan for all the MDAs to enlist Craftsmen and their products to be showcased to the world on the website of the ministry while the ministry devepoed training manuals in digitals skills, Installed solar inverter systems in 777 housing estate, maternity hospital Moronti PHC, Baga Road PHC, and Pulka PHC .

While installations of 10 KVA solar inverter systems was ongoing in Marama and Kwajafa PHCs and the ministry has prepared e-commerce at the new GSM market Bulumkutu and connected it to the wireless network and that of the Monday Market Traders was in the process of profiling alongside training programme for civil servants.

Engineer Malumbe noted also that th governor has constructed vocational Enterprise institution in Muna and Njimtilo while 2 different Institutions were under construction at different stages of Completion in Magumeri a d Mafa with 4 trades and 700 trainees capacity and boarding facilities of 6 blocks of hostels where each block has 32 rooms to provide training for drop-outs and school leavers willing to acquire skills to be become self employed.

He said the VEI will run 3 year modular programmes where each year of study could be terminal and shall have cogent and flexible structure and content that will eqiup the trainee with a practical working skill and possibility to exit at that level with National Certificate Part I, II and III.

According to him, apart from recommendation of different opportunities, the Borno Job Portal of 300 graduates, the ministry carried out optimization of management of streetlights network while existing vocational training centers and technical colleges were renovated and new VTCs and TCs were established alongside a National Enterprise Institution (NEI) in each of the 3 Senatorial zones. Also speaking, the State Commissioner for Commerce and Industries, Alhaji Lawan Kareto said a new modern market of 350 shops capacity was constructed in Kwaya bursa town by the governor within 365 days and BOSCO Filling station was being renovated along with the Borno State Hotel where a committee was Constituted by the governor headed by the Deputy Govenror Alhaji Usman Umar Kadaffur to give the edifice a facelift.

He added that 3 DAF modelo trailer tankers have been purchased for the BOSCO Filling Stations and 2 Mega Filling Stations have been proposed to be constructed in each of the 3 Senatorial zones while a committee was also constituted to report within 3 weeks on the possibility of awarding contract for the renovation of Maiduguri International hotel.

Kareto disclosed also that the state government has signed pact with the Bank of Industry (BOI) for a N2 Billion loan to empower traders in the state, pointing out that, government was also planning to establish 3 international border markets at Damasak, Banki and Abadam or Monguno to boost international trans-Sahara trade in the region.

According to him, due to shortage of wheat, Governemnts and other private partners of Maiduguri Flour Mills were trying to find lasting solution to the raw material but presently, the company has been operating in skeletal basis using maize for Maize Flour while the industrial hub along Njimtilo are still undergoing installations and fixing of equipments and Facilities to commence production in September 2020.