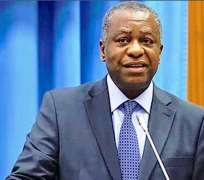 The Minister of Foreign Affairs, Geoffrey Onyeama has reacted to the demolition of a section of the staff quarters of the Nigerian High Commission in Ghana.

A source at the Ministry of Foreign Affairs had said that a businessman had previously claimed ownership of the piece of land where the Nigerian High Commission’s staff quarters were erected.

The source equally stated that the man showed up last week with some papers to support his claim and began to knock down the fence surrounding the building.

According to the source, the Nigerian High Commission had petitioned the Ghanaian Government about it, but there was no response.

However, the businessman returned to the property on Friday with a bulldozer and began to pull down the buildings.

He said, ”We strongly condemn two outrageous criminal attacks in Accra, Ghana, on a residential building in our diplomatic premises by unknown persons in which a bulldozer was used to demolish the building.