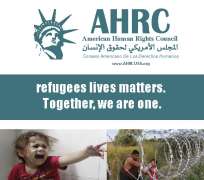 The American Human Rights Council (AHRC-USA) joins the United Nations and the global community in recognizing and observing World Refugee Day which is observed June 20 of every year.

This day has been set aside by the United Nations in order to raise awareness and build support and change within the global community on behalf of the world's forcibly displaced people.

The global refugee crisis is only getting worse. Refugees, stateless people, and internally displaced people constitute the world's most vulnerable population. They escape their homes due to forces beyond their control. They lose property, hometown, family and jobs. Desperately seeking safety for themselves and their family, they are often taken advantage of by unscrupulous smugglers.

There are millions of people in the world who are living in truly challenging circumstances. Currently, only a fraction of the refugees and displaced people are receiving the help they need, including the relief of resettlement.

"There are millions of human beings that are being denied basic human rights due to their refugee status. Safety and security are a basic human right of which we are all entitled" said Imad Hamad AHRC Executive director. "The refugee crisis is a global problem, it is everyone's problem, and it needs a global solution" concluded Mr. Hamad.

To learn more about the global refugee crisis and ways to be involved please visit: https://www.un.org/en/observances/refugee-day