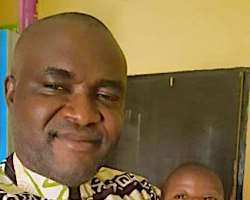 To you my readers I ask: have you ever reflected on the concept of Child Poverty?

Do you know that Children have their complete sets of human rights just like what obtains for all members of the Human family but with additional binding safeguards?

Well, the concept of Child Poverty is germane to the overall conversations around the thematic review of what strategies should be implemented to actualize sustainable development goals adopted as a framework of governance by member states of the United Nations organisation.

Sustainable development goals(SDGs) as discussed by those who should know, are a global agenda adopted by Countries in 2015, with a vision of ending poverty, protecting the Planet and ensuring that all people enjoy peace and prosperity.

The goals and targets are universal meaning they apply to all Countries around the World, not just poor Countries.

Other Sustanable development goals are; life below water; life on land; peace justice and strong institutions; and partnership for the goals.

The United Nations hopes that working together, the member nation's should achieve all these noble ideas by 2030.

But as a philosopher stated once that "Ideas rule the World " and as another original thinker stated that "there's no Army stronger than an idea whose time has come", this is the appropriate time for us to pause and ask the relevant questions on why Nigerian political elites can not be compelled by all means to become responsible and evolve practical ways of playing responsible politics that will deliver good governance and half and possibly eradicate the high incidence of Child Poverty such as malnutrition, hunger, insecurity and political instability.

Have we ever paused to ask ourselves the basic question why Nigeria is the only Country in the World whereby CHILD SLAVERY STILL HAPPENS?

Nigeria still witness the crime of auctioning of new born babies by groups of traffickers and the institutional checks for accountability and enforcement of the laws against human trafficking is still being administered like a Child's play.

The sad abd cruel reality is that the agency for the combating of trafficking in human persons known as NAPTIP is not sufficiently robust enough to combat this widening spectre of Child trafficking around the Country.

This writer believes that only a nation with irresponsible politicians will look away whilst the most vulnerable members of her key population are wantonly abused and mistreated. Mind you, the Primary duty of government is "the security and welfare of the citizens" as provided for in section 14(2) (B) of the Constitution of the Federal Republic of Nigeria of 1999 as amended section.

Why is there no commission under the Presidency for CHILD PROTECTION AND ENDING OF CHILD POVERTY?

We will return to ask these relevant questions but permit me to go further to show why the government needs to end Child Poverty because any nation that allows her Children to wallow in unmitigated poverty is a nation destined for doom.

Useful nations like the United Kingdom amongst others like Sweden, Denmark, Germany and Japan; Australia amongst few others have institutional mechanisms in place that are strong enough to combat Child Poverty. In those nations no child is left alone.. In Great Britain Children are adequately cared for by the state.

We will see what has just happened in Great Britain in this area but first there is this good news of the end of Polio in Nigeria which is one great effort by Bill and Melinda Gates Foundation that must be applauded.

The World Health Organisation (WHO) has declared Nigeria free of wild polio, following the completion of documentation for the free status.

The UN health agency disclosed this on its regional office for Africa in Brazzaville, Congo, official twitter account @WHOAFRO.

“It is a historic day for Nigeria, Africa and the Global Polio Programme,’’ WHO said.

“Amazing moment in history to have had our polio-eradication documentation accepted by (ARCC); the Nigeria team led by NPHCDA and partners demonstrated evidence of our polio-free status.

“I look back at the incredible leadership that has brought us here.

“Apart from President Muhammadu Buhari, GCFR, the two most important people who have made it possible due to their financial and technological contributions have been Mr Aliko Dangote and Mr Bill Gates.

“Thanks for this unquantifiable gift to Nigeria,’’ he said.

However, can we ask ourselves the hard question of why we rely so much on outsiders to solve our internal mess whereas we claim to be an independent nation.

The reason is that political rulers in Nigeria have collectively looted and carted away over $500 Billion from the nation's oil wealth in about four decades, so says the United Nations On Drugs and Crimes (UNODC).

Irresponsible Nigeria politicians steal the wealth of the nation thereby forcing millions of Nigerians into poverty.

Recently, President Muhammadu Buhari said there are about 100 million people in Nigeria whilst the National Bureau of Statistics says there are 80 million absolutely poor Nigerians making it 40% of the total populations of Nigerians who are too poor to feed their children well enough to grow in good health and escape the trappings of poverty. The cruel fact is that less than 1% of Nigerians control over 95% of the Commonwealth of Nigerians by hook or crook. Other Countries allow institutions to be strong enough to make sure that few people do not corner illicitly the wealth of their respective entities. A Nation like Norway has even built Sovereign wealth fund that will take care of 100 next generations of their people. But the Sovereign wealth fund of less than $5billion built up by successive governments of Yaradua and Jonathan have been looted by the current administration and the state governors and the nation has less than $1billion left.

We will go to the United Kingdom to learn one lesson from what the politicians are doing to tackle child poverty in Great Britain.

as reported by AFP on 19th June 2020 @ 12:51 pm.
British Prime Minister Boris Johnson on Friday said English schools would receive £1 billion ($1.2 billion) in funding to help pupils catch up after missing months of classes due to the coronavirus.

The announcement came as health minister Matt Hancock said the government had lowered the country’s coronavirus alert level, after a recommendation by scientific advisers.

The move from Level 4, where transmission is high or rising, to Level 3, where the epidemic is in general circulation, was “a big moment for the country”, he said.

The government is grappling for positive news after facing sustained criticism over a broken pledge to have all primary school children in England return before the summer break.

It is also struggling to get all pupils back for the new academic year in September if social distancing rules requiring people to keep two metres (6.5 feet) apart remain in force.

The new money includes £650 million for state-run primary and secondary schools to “lift educational outcomes”, and £350 million to help tutor the most disadvantaged youngsters.

Headteachers will be able to decide how to spend the £650 million.

But the government said it expects it to be spent “on evidence-based interventions”, in particular small group tuition.

Concern has risen about the impact of school closures on children, particularly those with no computer or internet access.

“This £1 billion catch-up package will help head teachers to provide extra support to children who have fallen behind while out of school,” Johnson said.

The reporter observed what they called Regional variations.

According to the report: British schools have been closed to most pupils since late March, when the country headed into lockdown as the virus peaked.

Some primary school year groups and older students preparing for exams were able to come back to school in England earlier this month.

But the government backtracked on the remainder, after concern from teaching unions about staff shortages, and restrictions on space due to social distancing rules.

Johnson is under growing pressure to relax the rules to one metre to make it easier for schools and hospitality businesses to restart.

Scientists said there had been a “steady” and continuing decrease in COVID-19 cases, indicating transmission was no longer considered “high or rising exponentially”.

Hancock said the downgrade in the alert level was a sign the country was “getting back on its feet”, after more than 42,000 deaths from over 300,000 positive cases.

But there are regional variations about easing restrictions across the UK.

Scotland’s schools are not scheduled to return until the new term starts in early August. Pupils in Wales are due to come back later this month before the summer break.

In Northern Ireland, most pupils are set for a return in late August after the devolved government agreed to cut the social distancing measure to one metre for pupils in school.

“I am determined to do everything I can to get all children back in school from September, and we will bring forward plans on how this will happen as soon as possible,” Johnson said.

Education Secretary Gavin Williamson said the government also hopes to allow providers running holiday clubs and activities for children over the summer to open “if the science allows”.

“Guidance will be provided to the sector on how to implement the protective measures necessary to open safely, and to parents on how to minimise the spread of the virus if they choose to attend,” he added.

We have now seen just one thing amongst many that the British Political system is doing responsibly to address the issue of Child Poverty as one of the larger issues around the necessary conversations on child survival Strategy. In most European nations fathers who father Children and leave them with their Mothers are made to pay for Child care.

In Nigeria, many single Mums suffer alone to take care of their babies and many abandon these toddlers to cruel fate on the streets. In the North there are over 10 million out of school children wandering about on the streets. The Goodluck Jonathan's administration spent billions to construct and commission Almajirai schools but in 2015 when Jonathan lost re-election bid to the current administration these schools are abandoned and these less privileged poor children abandoned to beg in the streets have fallen deeper into child poverty.

Can we have the National Assembly and the State Assemblies in Nigeria work to ensure the Child Rights Act passed in Abuja since 2003 are domesticated in their States so Children's services and Rights are legally enforced as a matter of governmental obligation?

Can we have the Wife of the President and the Wives of governors roll out sustainable programmes to advance and institutionalize the combating of Child's poverty related issues? Can we have a reinvigorated NAPTIP that will be adequately funded and staffed to work to stamp out Babies' factories and child slavery in Nigeria?

This is the time for action and not empty rhetorics. Generations unborn will not forgive our failings to tackle and stamp out these man made poverty related afflictions affecting millions of Children born to less privileged Citizens. Child Poverty is a Crime against humanity and should be so treated by all and sundry.