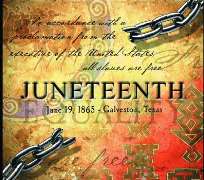 The American Human Council (AHRC-USA) joins all Americans in observing the 155th anniversary of Juneteenth. Juneteenth is also known as Freedom Day, Jubilee Day, Emancipation Day and Cel-Liberation Day. It is celebrated every June19th.

This American holiday is an occasion to celebrate the end of slavery and to remember our past. It reminds us of the original sin of this country: Slavery.

Juneteenth this year comes amidst wide range of public protests, locally, nationally and internationally condemning the murder of George Floyd. George Floyd is another victim of the ongoing police use of excessive force. Police abuse affects all of us but it has fallen the hardest on the African American community.

There is a loud American voice demanding justice, equality and respect. Time is overdue to deal with racism and its manifestation in policing of minorities, especially the African American community.

This year’s Juneteenth serves as an occasion to honor all black American victims of police brutality including Mr. Floyd through reforming policing. Change is due and possible. This year’s election is key opportunity to make such change a reality. We should examine candidates’ platforms and positions carefully and vote for those who stand for justice and equality for everyone.

AHRC recognizes and salutes all levels of government and the private sector entities recognizing Juneteenth as a formal holiday to celebrate freedom. However, we should be mindful that while proclamations and political statements are important, what is really needed is policing reform.

We have been hopeful for real change but the recent police killing in Atlanta shows that change will not come easy. Changing deep rooted police practices and culture will be a hard and long process. This country has thousands of police departments and millions of police officers which makes change hard. While we appreciate the honorable service of the overwhelming majority of police officers, the reality is that we also have too many officers engaged in troubling and troublesome practice. That has to change.

“This Juneteenth is different from the previous ones,” said Imad Hamad, AHRC Executive Director. “The national and international attention is focused on the injustices endured by African Americans, added Hamad. “Despite the news from Atlanta, I am optimistic that next year we will celebrate Juneteenth with real reforms a lived reality,” added Hamad.