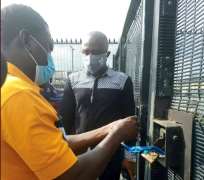 The authorities of the FCT ministerial Task Force Abuja have woken up to their responsibilities after the embarrassing concert by Nigerian singer, Naira Marley on Saturday night.

Hours after the concert that rubbished all COVID-19 rules became public knowledge, the FCT Ministerial Task Team on #COVID19 sealed up the concert venue, the Jabi Lake Mall.

The closure will be for an indefinite time” the Task Team tweeted. It said the concert violated Presidential Task Force’s directives on the ban on public gatherings “as part of measures to contain the spread of the dreaded pandemic in the territory”.

As one commenter said on Twitter: ‘this is campaign after election”. Naira Marley was supposed to hold a drive-thru concert at the mall.

But it became a real festival with fans throwing into the dustbin all the COVID-19 protocols.