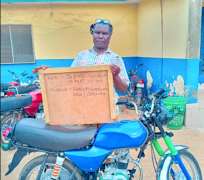 A 56-year-old man, Jafaru Ismaila has been arrested by men of Ogun State Police Command for pretending to be a police officer in order to steal a motorcycle.

The suspect was arrested following a distress call received at Warewa police division that the suspect came to Okada Park and claimed to be a police officer. The Nigerian Voice gathered that the suspect flashed an identity card of a police officer and seized a Bajaj motorcycle with registration number WDE 903 VN from one Felix Adeyemi and took it away towards interchange along Lagos Ibadan express way.

On receiving the distress call, the DPO Warewa division, SP Folake Afeniforo quickly led the patrol team and trailed the suspect who was apprehended at Ibafo area with the motorcycle.

The PPRO said the suspect who hails from Adamawa state was not a police officer but impersonated the police.

The police spokesman said the suspect stole the police Identity card of a retired Deputy superintendent of police which he has been using to impersonate.

The identity card and some police documents as well as the Bajaj motorcycle with registration number WDE 903 VN were recovered from the suspect.

The Commissioner of Police in the state, CP Kenneth Ebrimson ordered a full scale investigation into the activities of the suspect with the view of charging him to court as soon as the investigation is concluded.