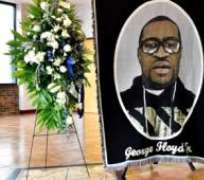 Yesterday (June 11), an ordinary African American, George Floyd was transformed to an icon of revulsion against American apartheid and systematic injustice targeted at blacks and other minorities in the so called God`s own land and a nation that prides itself as the bastion of democracy and freedom. His death at the knee of a white policeman on May 25 caused international outcry that reverberated in every corner of the globe. His funeral which was broadcasted for more than three hours by many international broadcasters is the type yet to be equaled with similar respect given to former monarchs and presidents.

The world view of United States of America has changed and the country can no longer pull wools over the eyes of other nations as to its claim of democracy, world policeman, the melting pot of the world and with the disdainful words on its currency `In God We Trust`. It is only those from outer space can believe American moral authority to pontificate to others about the fine grains of democracy. At best, America is now seen in the prism of a prostitute preaching morals.

The history of America`s origin is rooted in the political and religious dissenters in Europe who wanted to exploit the opportunities in the New World. Thus Europe was happy to do away with these social and political deviants. America was a virgin land waiting to be exploited for its rich resources. The Europeans met the Red Indians, the original owners of the land. Some of the Red Indians were exterminated through massacre, alcohols and those that remained were put in the reservations under the misguided veneer not to pollute their culture. The Africans were unwilling immigrants to America via the Trans-Atlantic Slave Trade. Despite the abolition of the slave trade, African Americans remained the butt of dirty jokes and so treated in all spheres of life. Black Americans did not get quality education and were discriminated against in the civil service, health care and political spheres.

It was this systematic injustice that galvanized Dr. Martin Luther King Jnr to press for racial equality and freedom. His famous speech ` I have a Dream` shocked the very foundation of the American Society. The American government led by cerebral John F Kennedy and later Lyndon B Johnson were simply confused about the King phenomenon. However, enemies of progress cut short the life of King in 1968 and that witnessed massive protests by black people. Few concessions were given to blacks but the whole system remained skewed against the blacks. King Jnr was given national honour of public holiday on January 15 against the racist protestation of President Ronald Reagan. I am going do this memory lane so that you can understand the socio-milieu that gave birth to George Floyd and the white police man that killed him.

The truth of the matter is that the American system is a fraud. The so called melting pot is meant to serve the interest of the whites, another echo of Aryan superiority claim of Adolf Hitler. True that Obama, a black man was elected the president of the States and shattered the political glass ceiling. What such commentators and political scholars failed to realize is that Obama is not a descendant of former freed slave but of Kenya ancestry. American claim to democracy is hollow and spurious. It was the American government that annexed a large chunk of Mexico turning it into three states. The Americans were happy to make Cuba, a haven of prostitution and drugs for their wealthy citizens. That is why till death; Fidel Castro was seen as American sworn foe. What of Panama and forceful arrest of Manuel Noriega? What of the invasion of Iraqi and the search for chemical weapons by the Bush administration? Look at the crisis that is Libya today, the Americans are responsible. The list is endless and Amnesty International, the so called human rights group does not see anything wrong with that.

America must look at the mirror and correct the scarecrow image. Black Americans suffer from police brutality, economic deprivation and racial injustice that found expression in poverty and lack of education. Joe Biden, the former vice president and presidential candidate for November election made a plea to end the racial injustice. Hear Biden: ‘Now is time for racial justice. We must not turn away. We cannot leave this moment thinking we can once again turn away from racism that stings at our very soul`.

George W Bush, a former president was more emphatic about the American tragedy. Said Bush: `It remains a shocking failure that many African Americans, especially young American men are harassed and threatened in their own country. This tragedy- in a long series of similar tragedies raises a long overdue question: How do we end systematic racism in our society? It is time for America to examine our tragic failures`. It is indeed a task before every American of all political hues, the United Nations and Amnesty International to address these issues and truly make America, a truly democratic nation. That remains the best legacy for King Jnr , George Floyd and other martyrs in the struggle for equality and freedom.