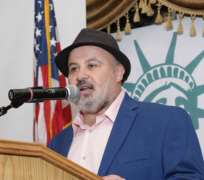 Racism is a universal challenge. There is no society on earth that is free from racism. While the US and other countries have made progress to be less racist, racism still exists. The death of George Floyd has resulted in avalanche of condemnation and massive protests. This reaction to Mr. Floyd's death is a clear indication that there is a critical mass in society that is against all forms of racism.

We should not accept racism in any form. We can do better. Racism goes against core American values- equality and freedom. One can't be free if they are faced by racism. It is inhibiting. Racism is a lived reality for African Americans and people of color. It is a basic fact. Of course, this does not mean you live in a racist society in a racist. We don't. We live in a country that has a racism problem.

Mr. George Floyd's death shook society to its core. It was so brutal and so senseless. It was videotaped. There was no way denying it or explaining it away. While abuse of police power is a universal problem, it falls especially hard on African Americans. Overwhelmingly, the police people who do their job honorably. But as we all saw on TV, it takes only one officer and other officers standing by to tarnish the image of all police and sour the national attitude to police and policing. Mr. Floyd's death came as a painful reminder that racism can't be ignored or used for political expediency. It is deadly. It is a life or death matter. People of conscience are rightfully angry.

The outpouring of anger was spontaneous. As an activist with decades of years of activism I can attest that this moment is exceptional and transformational. We see protests worldwide and in nations that don't even have a race issue nearly as critical as the US does. This means one thing: We all see ourselves in George Floyd. We see our humanity in him and we relate to him. His death is our death and we are all outraged by it. Just like with Covid 19, George Floyd reminded us of our common humanity. As humans, we are all vulnerable to the coronavirus. As humans, we are all vulnerable to the excess of state use of force. Being human being today is a salient part of the identity of every human being on planet earth.

This anger is real and sincere. It is a manifestation of the basic decency of average human beings. No one is getting paid, there is no free food. There is no celebrity entertaining the crowds. It is a genuine outpouring of human empathy and sympathy.

There are issues with policing. We have thousands of police departments in this country. We have hundreds of thousands of police departments. There are common problems. There is the issue of transparency and accountability for abusive police. It is a fact that abusive police are costly to society. Police who engage in serious abuse cause the city to pay millions in damages. And what do all the major abusers, a small fraction of all the police, have in common: a history of complaints that resulted in minor discipline, if any. This has to change. We are all paying for our abuse.

The first obligation of government is preservation of life. The most important human right is the right to life. If one of us has their life threatened, whom do we count on? The government represented by the police. It is truly tragic and a breach of the social contract when the police cause the death. Tragic and senseless.

There is nothing special about George Floyd. He was an ordinary man. But his brutal death has resulted in an extraordinary moment. Mr. Floyd never expected that his life will end the way it did. He never expected his name to be known worldwide. He just wanted to be- to exist.

This time we have the momentum for real change. In a democracy, the relationship between the people and the police tasked with protecting them and serving them cannot be adversarial and confrontational. A dysfunctional police-community relationship is bad for policing and bad for democracy.

Time is due to move forward and change the reality of policing throughout the US. The whole world is looking at us. The solution is our shared responsibility. This is not a partisan or ideological issue. Racism is a pandemic, the cure is embracing our human race. We owe it to George.