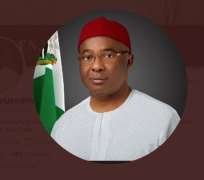 He made this call while addressing officials of the agency who paid him a courtesy/familiarization visit in his office at the state Secretariat complex, Owerri.

"We need to get something better from you. I know that you people are trying, but you need to do more for us. We are always available to collaborate with you and assist in any way necessary.

"There should be a way of anticipated approval in most of these things, in order to save our people from the anguish of these bad spots on federal roads".

Nwosu listed some of the federal government roads/ spots in Imo State where the state government was intervening to include; Irete, Mgbidi, Mgbee, Njaba, among others.

Earlier, the FERMA Engineer incharge of Imo State, Engr Chukwuemeka Maduagwu said they were on the visit to synergize with the ministry in its effort on delivering good roads to Imolites.

"We have observed with glad heart the zeal you have been dissipating on quality control which is geared towards providing good roads to the state, unlike what obtained in the recent past".

Maduagwu described the Commissioner as a round peg in a round hole who is in a familiar terrain and expressed optimism that he will do well.