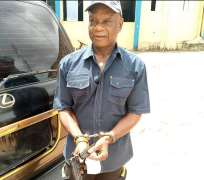 Monday, 8th June 2020 Intersociety, Onitsha Eastern Nigeria: The Int’l Society for Civil Liberties & Rule of Law-INTERSOCIETY has no problem with exercise of ‘power of arrest’ by the High Command of the Nigeria Police Force with respect to 5thJune 2020 arrest of Mr. Pius Nweke (CEO, Best Aluminum Manufacturing Company Nigerian Limited, Awada, Anambra State). Power of Arrest, provided in the country’s Criminal Code Act of 2004 (for Southern Nigeria) and Penal Code Act of 2004(for Northern Nigeria), is a common responsibility the NPF and its leadership share with every citizen of Nigeria that has reached the legal age of 18. The Nigeria Police Force’s ‘power of arrest’ is granted by Section 4 of the Nigeria Police Force & Regulations, CAP P19 LFN, 2004.

The ‘Power of Arrest’ by every Nigerian citizen of legal age including the personnel of the Nigeria Police Force, granted by the country’s body of criminal laws, is given to the citizens in furtherance of their constitutional duties and responsibilities clearly outlined by Section 24 of the Constitution and strengthening of their rights to life in Section 33 of the Constitution and self defense in Sections 32(3) of the Nigerian Criminal Code Act of 2004 (applicable in Southern Nigeria) and 59 of the Penal Code Act (applicable in Northern Nigeria).

However, our deep grouses against the Inspector General of Police, Mr. Mohammed Abubakar Adamu and his “Special Tactical Squad” are the Gestapo (secret terror state police) and commando styles used in carrying out the arrest. Beyond the aforesaid, the most undoing of the IGP and his “STS” personnel was the public parading of the Best Aluminum CEO as if he is ‘a hardened kidnapper caught in the act’. This is not only a height of unprofessionalism but also an indication that the Nigeria Police Force is terminally sick.

It is recalled that Mr. Pius Nweke was waylaid and abducted by the IGP’s ‘Special Tactical Squad’ along the Anambra Broadcasting Service-Shoprite area of the Onitsha GRA on Friday, 5th June 2020. He was taken to the Onitsha Central Police Station (CPS) where he was held and later released and asked to report next morning, from where he was taken to the Force Headquarters where he is currently being detained. The Police said his vehicle was searched and a pistol found and that he possesses the short gun “illegally”.

Going by the country’s 1999 Constitution and its subsidiary criminal legislations as well as relevant treaty (international) laws ratified or domesticated by Nigeria, a criminal who is of legal age or 18 years is not a criminal until he or she completely and sequentially goes through the processes of investigation, arrest, prosecution, fair trial, conviction and sentencing. But in the case of the commando styled arrest and ‘caught-in-the-act-kidnapper’ public parading of Mr. Pius Nweke, the Nigeria Police Force has ended up ‘arresting’, ‘judging’ and ‘finding him guilty’.

By publicly parading him in such despicable manner; with his two hands handcuffed and forced to hold a pistol, bullets and a mobile phone; the Police authorities have told the world a different story. This was done by portraying him as ‘a hardened kidnapper caught in the act’. The despicable manner with which the Nigeria Police Force arrested and treated the Best Aluminum CEO also gravely violates his constitutionally guaranteed rights to life, dignity of human person, personal liberty and fair hearing; all contained in Sections 33, 34, 35 and 36 of the country’s 1999 Constitution.

The Force is so terminally sick that it has now turned its constitutional and statutory duties and criminal laws of Nigeria offside down by protecting the guilt and punishing the innocent; which it now does with utter vehemence and rabid impunity; to the extent that those who commit heinous crimes are spared and the innocent or law abiding deadly targeted. Part of our fear in the above state terrorization of the law abiding citizens is the possibility of forcing them including the CEO of Best Aluminum into becoming agents of the Caliphs and enemies of their own people.

By the Robbery & Firearms Act, CAP R11, LFN, 2004; “firearms” include ‘any canon, gun, rifle, carbine, machine gun, cap-gun, flint-lock gun, revolver, pistol, explosive or ammunition or other firearm, whether whole or in detached pieces’. By Section 1 of same Act, a citizen tried and convicted of robbery is liable to minimum of 21 years imprisonment, if he or she robbed without firearms and if caught robbing with firearms, he or she is liable to death sentence. The same death sentence applies

The same death sentence applies to a citizen tried and convicted of kidnapping.

However, according to Section 3 of the referenced Robbery and Firearms Act of 2004, a person tried and found guilty for ‘illegal possession of firearms’ is liable to ‘10 years imprisonment or payment of N20, 000 fine or both’. In the Nigerian body of criminal laws, gravity of offense is determined by number of years in prison term. That is to say that ‘accusation of illegal possession of firearms, with ten years prison term, is not the same with offenses of ‘murder’, ‘terrorism’, ‘kidnapping’ and ‘armed robbery’ which attract death penalty or life imprisonment.

Therefore, the highlights above are to bring to the fore the grave unprofessionalism and ‘bad job’ done by the IGP and his ‘STS’ in the matter under reference. Going by commando nature of the ambushed arrest, the motives of the IGP and his STS are utterly dubious and lacking in professionalism, honesty and neutrality. Put differently, the ambushed arrest and hurried public parading of the CEO of Best Aluminum are a clear indication of ‘giving a dog a bad name so as to hang it’. As a matter of fact, the Inspector General of Police and his ‘Special Tactical Squad’ acted as if ‘they are hired private militias.

The Police authorities also acted like gangsters by engaging in a clear plot of attempting to destroy the image of such a man of age with track records of entrepreneurship who is also a major employer of labour with over 30 years standing. Through his company’s annual direct and indirect taxes paid to the Government of Anambra State and the Federal Government of Nigeria, the company partly contributes to the NPF annual budgets including its 2020 budget of N408b. The NPF annual budgets including its 2020 budget of N408b are made up of funds raised from citizens’ direct and indirect taxes, oil and gas proceeds and borrowings secured on behalf of the generality of Nigerian citizens by Government.

We therefore boldly ask the IGP and his ‘Special Tactical Squad’ the following questions: Was the Best Aluminum CEO truly found with a pistol and if true, was it his or planted? Since ‘any citizen can possess personal firearms in Nigeria with licenses’, at what point in time did the IGP and his STS get wind of suspicion that the Best Aluminum CEO, who is the second in command of the three family brothers was possessing illegal firearm or pistol? Was he duly invited or given chance by the IGP and his STS to provide its license or otherwise? What if he was duly licensed to possess the short gun or pistol in consideration of his societal status and in recognition of protection of his rights to life and self defense? What if he was properly licensed and

to possess the short gun or pistol in consideration of his societal status and in recognition of protection of his rights to life and self defense? What if he was properly licensed and has gone for renewal and was told to wait and allowed to maintain status quo?

Was there any valid evidence before the IGP and his STS, before the arrest and shameful public parading, showing that the Best Aluminum CEO has used the pistol to commit the offense of armed robbery, or kidnapping, or murder, or attempted murder, or heinous domestic violence? If the IGP and his STS can be this “professionally quick” in response in apprehending such a man of high societal and entrepreneurial value for possessing a pistol, why are the same IGP and his STS turning blind eyes, if not aiding the Jihadist Herdsmen who go about with recklessness in broad day light brandishing automatic rifles including AK-47 and AK-49 rifles in the streets and machine and sub machine guns in the bushes or forests? What about the five AK-47 rifles caught borne by some Jihadist Herdsmen recently in Awka North LGA of Anambra State, as a result of which the President of Ohanaeze Ndigbo petitioned the same IGP? What is the fate of the petition and where are the five AK-47s?

Finally, the ordeal now befalling the Best Aluminum CEO should serve as a lesson to all and sundry particularly members of the rich and political class. It is specifically a reminder to the leadership of Intersociety concerning an encounter we had with him in 2013. As an apologist of today’s rich men’s exploitative and oppressive tendencies, the CEO of Best Aluminum had sometime same year oppressed one Pastor Sylvester Agu, to the point of forcefully taking over his parcel of land located at the Nkisi River bank in Onitsha GRA; after pulling down his dwelling house and killing his domestic livestock.

The Best Aluminum CEO had conspired with the State Ministry of Lands to chase the said Pastor Agu out of his land, using his wealth, connection and intimidation. In the end, through now Barr Justus Uche Ijeoma, Intersociety ended up recovering the N500, 000 extorted from the Pastor by the officials of the Anambra State Ministry of Lands. It was, therefore, Pastor Sylvester Agu of Ezinifite-Aguata yesterday as the victim of the Best Aluminum’s ‘man’s inhumanity to fellow man’; today, the same Best Aluminum CEO has become a victim of same injustice meted to his victim seven years ago.e

We hereby call on the IGP and his STS to purge themselves of the shame they brought to themselves in the instant case and as a matter of uttermost immediacy, un-conditionality and inexcusability release the Best Aluminum CEO, Mr. Pius Nweke. The IGP and his ‘Special Tactical Squad’ must also totally refrain from dastardly act.