Nigerians can breath...Their lives do not matter 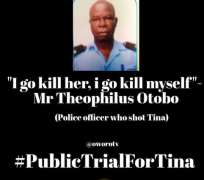 Who would want to be a Nigerian, in the bitterest moments he finds humor, in action, in words, most times beyond the usual. It’s in us, like that epic advertorial for a lactose brand.

The US of A has again proved what a few of us are not ignorant of, that racism is real and still underneath the fabric of their society. If you think it’s only the US of A then you are possibly not exactly not schooled in these matters. Go to UK, Italy, Spain, check about monkey chants targeted at black players and all that. I could pen an epistle. However it’s almost two weeks of non-stop protests across cities in the United States. And whether it brings significant change remains to be seen.

Back to my first remark, Nigerians and humor, imagine a group of Nigerians protested at the American embassy here in Nigeria. Carrying placards, some even had the temerity of a ‘George Floyd’ account for donations. Social media accounts had display pictures of black men and that black lives matter.

Same time rape took an upward swing and killings in the North Central states of Plateau and Benue increased, and Southern Kaduna also became a killing field once more. Bandits have intensified their strikes, as security chiefs are busy briefing. We are speaking about police reforms, restructuring, and the killings continue. We have cuts in health and education budgets. We have many problems, we say that our constitution is the problem, yet the 1979 constitution was the 4th best in the world, yet we are still tinkering with the current one, giving and taking all sorts of executive orders and not able to fixate our grievance on something positive.

Have you seen the army or the police audited account or even EFCC accounts. Yet we continue to breath, because no one will protest.

My teenage son had told his mom, while discussing the George Floyd ‘police’ killing, “mom it would be better to be killed by a white cop than a fellow Nigerian”. So before we get it all muddled up. Who keeps a record of all the extrajudicial killings? All the Nigerians that are killed by Nigerians who really protests, why is that our own lives do not matter to us, why is it a taboo to die for Nigeria?

A trigger-happy mobile policeman attached to the Operation Safe Heaven murdered Ringi a young lad, and the irony is that the safe heaven wasn’t safe at all. The University of Jos undergraduate’s life cut short, even the protests cut short. The security forces couldn’t even parade the shooter. Like Ringi, like Tina...the 'poor' girl who would have be writing her high school transition examinations sent to the world beyond, how many Nigerians have been shot down in their prime for as little as N5 and nothing happened to anyone. No protests, no placards. Case quietly closed after all the rhetorics of justice would be done, then all that commonly rehearsed ‘we condemn the act and the killers would be brought to book’ and in some cases some very demeaning cash donations to the family of the deceased.

In the last month, the police and these days civil defense have joined other forces funded by the Nigerian people to kill same citizens they are meant to protect. The statistics are grim. Less than a percent of the killer cops are brought to book, at best we see dismissals.

No one really protests, there are no follow through, no staying power, our perseverance for justice is almost near zero, we soon forget, slow to learn and quick to dispatch, like the indaboske bahose we are slamming into other issues.

Nigerian lives don’t matter not when there is trendy matter to settle, or we are discussing about that pepper dem red Aso Ebi, how can we not breath when Hammed Ali’s new wife and ex-boyfriend can provide us with respites with a public show of ridicule and opprobrium. How can our lives matter when NCDC turn COVID19 figures to Naijabetfigures, as states are disputing figures with the NCDC.

We breath, our lives don’t matter, that’s why our own COVID19 cases when not protesting and feeding fat in Isolation Centres, most Nigerians are not appreciating the much done by our own health practitioners, because the trust deficit is on a high between the governed and the rulers.

You remember that SARS social media rage; it ended there, on the pages of social media! On air, we rant, while social and criminal banditry in reality stares us in the face, like a pastor and his wife killed on their farm in Taraba state...they can now breath. Barakat Bello, teenager who was undertaking the National Diploma programme in Science Laboratory at Technology Federal College of Animal and Production Technology, Moore Plantation, Apata, Ibadan, Oyo State, raped and killed near her house, we breath, no fuss!

The First Lady Aisha Buhari, a few of 'those at the top' noise but no one will really protest...sometimes I think we are all guilty given the kind of noise we make on National Assembly matters...like screaming heavens because of the renovation of their palace while earth remains. We were ready to protest opening of mosques and churches and while almost everyone becomes an expert on rape, everyone is suddenly sharing how she was raped, who is at fault, what women should wear, how men are guilty and animals, how most men have raped house helps, we forget men who rape their spouses. We have forgotten that Benue little girl incident, we are no longer talking about the Jigawa state incident, our legislators do not have a sense of rage, the Edo state House of Assembly members did not go out in the street for Uwa the girl who was raped and murdered in a worship place. All because of the conscious and unconscious fact that the Nigerian state has not stopped raping us since Mungo Park came around, and after all we are still breathing.

We are breathing in the light of tribalism, nepotism, ethnic parapoism, the 'where are you from' or 'its our turn policy' legitimized by federal character and catchment areas don’t choke us as we kill our future, the lives of our kids don’t matter as we fill that personae non grata form with religion, and state of origin being more of a priority than merit.

We breath through our hate quotient for each, and it is a very high hate quotient, one that sees Igbos versus Yoruba contend between Soyinka and Achebe, Fulani kills Gambari, who cares, it is not in the exactitude of our divisions but in the impossibility of our focus. We do not have a nation state, we are not creating one, look at the COVID19 drive whether scam, real, true or imagined and in Hon. Kazaure's voice I ask, how is that the same vigor is not extended to the fight against banditry.

A society that does not care that her people are broke, broken and divided pats herself in the back, all because really no one would revolt, we are too divided to have a collective morality on what is right, so we spend more time on figuring out, snagging on debates about whether Mazi Buhari, is Aboki Sule, we spend time protesting the rhetoric of Nnamdi Kanu, and that ill-prepared tea seller who speaks on the Arewa side of the hood asking Igbos and Southerners to leave the north.

We pretend like we do not know that these cases of rape never go far because of the culpability of family and security personnel, we forget that we are the same persons that encourage victims who even talk, to go and never mind they will be fine…after all Nigeria and Nigerians are breathing, what do lives count for—Only time will tell.