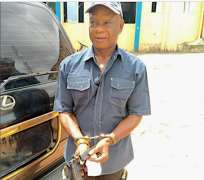 His arrest was effected by the Inspector General of Police Special Tactical Squad on Friday for allegedly being in possession of a pistol.

Abang said the STS, which carried out a stop and search around Awada, near Onitsha, found a pistol in the billionaire’s car.

He said: “Today between late morning and afternoon, men of IGP-STS based in Onitsha while on routine patrol on stop and search around Awada general area stopped an on coming Lexus Jeep with covered number plate.

“So they conducted a search on the vehicle and the occupant and in the process found a Beretta pistol in possession of one Pius Nweke, who claims that he is from Anambra State.

“He has been taken into custody by the STS team for further investigation and necessary action.

“Definitely they will take him to Abuja because STS operating in Awka is just a section and their boss is in Abuja, so the man will be transferred to Abuja.”