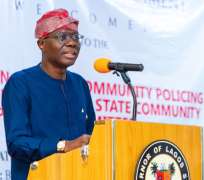 The Government of Lagos State is set to allow resumption of worships in churches and mosques in the state.

Governor Babajide Sanwo-Olu said churches and mosques would now be allowed to reopen after after several weeks of closure due to the coronavirus pandemic.

The governor stated this on Thursday during a briefing at the Government House, Marina.

In a tweet by this Chief Press Secretary, Gboyega Akosile, he wrote

“Churches & Mosques to resume services in Lagos as follows: Muslim services to resume on 19th June while Christian worship begins on the 21st of June, 2020. Children below age 15 not allowed. Religious gatherings are restricted to Fridays and Sundays only. @jidesanwoolu”