The Namugongo Martyrs Were Political Rebels! 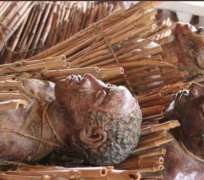 Further to my article, ‘Namugongo ‘martyrs’ were not really martyrs’, It is generally accepted that a martyr is a person who sacrifices his or her life or their personal freedom in order to further a cause or belief for many. This cause or belief may be political, cultural or religious. Some of the historical political martyrs include the Manouchian Group (a group of foreign communists, heroes, and martyrs of the Resistance in France 1940-44).

In Buganda culture, Kabaka was the law and everything he asked for had to be granted by his subjects. For example, If Kabaka was visiting somewhere in Buganda and fancied one’s wife, one would let the wife go and it used to be an honor to do so. So, one could only imagine what the king would do to anybody who disobeyed him in the name of a religion, a tool he saw as intended to weaken his kingdom.

Secondly, I wish someone could tell me the difference between Muslims who have died for their religion during the religious wars in Buganda and Namugongo x-tian martyrs, and why they cannot have a bank holiday, like the Christians, if Bank holidays is the only way of recognizing martyrdom. According to Amisa Kayondo,’’ Around 2009, I had a chart with a Muslim leader about this topic and refurbishing of the Namugongo Muslim Mosque built in honor of the Muslims burnt by the then Government. To my surprise, he told me that it was Muslims who were killed first, and the number was much bigger around 78. He was kind of confused about whether they should be called Martyrs giving the same reasons as you, Abbey Semuwemba, as to whether they were killed for being Muslims or for disobeying government rules. The other point he raised was that people might be mistaken and start worshiping them as Christians do but he didn’t close the door of having the place renovated.’’

If we are to analyze the current Palestine Martyrs or sometimes called suicide bombers, they all go into some form of training to prepare themselves for the deadly cause ahead which is deaths. Historically, church martyrs also used to go into some form of training to prepare for martyrdom. They used to fast and intentionally harm their bodies in order to build perseverance in face of immanent persecution. In that sense, Namugongo martyrs were trained in scripture, church history, prayer and baptism and , probably it helped them to sustain the pain, but isn’t this what is called the modern day ‘brainwashing’ of people to die in the name of religion? So if the Namugongo Martys were ‘brain washed’ to die for the Christ, what is the difference between them and those claiming to be dying for Islam in the new world order? (Source of reference: Maureen Tilley, “The Ascetic Body and the (Un)Making of the World of the Martyr,” Journal of the American Academy of Religion; for a similar insightful study on martyrdom and torture in antiquity).

In addition, historically, Protestants and Catholics refused to recognize each other as ‘martyrs’. So why was it so important for these two religious sects to agree on the title ‘martyr’ at that moment in time? Was it something done as an act to forge unity between the Christians and protestant? In the 16th century, both protestants and Catholics affirmed that it was not the punishment, but the cause that made one a martyr. Could Protestants killed for faith be called ‘martyrs’? The Catholics answered,’ No”. On the other side, could Catholics killed for faith be called ‘martyrs’? The Protestants said,’ No’. An example is when Puritan minister Giles Wigginton told catholic Margaret Clitherow, on trial for treason, that she was deceived if she thought that dying for catholic faith counted as martyrdom. What makes it worse is that even protestants did not affirm other protestants as martyrs as evidenced during the time of Luther. Luther thought the deaths of Zwingli’s followers should not be compared to the ‘holy martyrs’ and condemned people for making such a comparison.

It was only during the reign of pope John Paul 11,particularly in 2001, when in Ukraine, that he tried to address this issue of division in opinion between Catholics and protestants- in regard to ‘martyrs’, when he gave an address to bless 27 Greek catholic martyrs. The wise pope recognized both sides as ‘joint’ martyrs. He was doing the same thing that was done at Namugongo: to forge unity between the two sects (Catholics and protestants).

My argument here only hinges on people having a day off work for questionable reasons. We should not start having ‘bank holidays’ for whoever fights to change a bad system or culture in the country. For instance, there are bad things going on in the current political system and some people have lost their lives in the process of fighting for what is right but will it ,therefore, be justifiable to start having bank holidays just because so and so died for a political cause in Uganda? Because if we start recognizing all these deaths, then Uganda has got a lot of martyrs rather than the so called Namugongo Martyrs.

According to Abbas Muluubya, ‘’For purposes of history, I guess this information should be available in the Hansard. The genesis of the current ‘bank holiday’ for Martyrs in Uganda was as a result of possible ‘nugu’. The Late Abbey Kafumbe Mukasa (May Allah forgive his trespasses) moved a motion to officially grant holidays for Eid to parliament or NRC whatever it was called then. Prior to that holidays on Eid were at the discretion of the President- sometimes granted others not. Hon Mutebi Mulwanira proposed an amendment to include martyr’s day which was opposed by among other historians, (PhD) Dr. Philimon Mateke, on the basis that the presumed martyrs were actually ‘rebels. Eventually the motion was passed with a compromise amendment that came along with Martyrs day, Women’s day, Heroes day etc’’.

According to Beti Kamya, while still active on Ugandans At Heart forum(She’s now a minister in Museveni’s government),’’ It was all about politics, really, not religion, although the Bazungu managed to spin it their way and the gullible Africans, as usual, bought it all.Mwanga was not fighting religion, he was resisting colonialism. At first, he, too, converted to Christianity and was baptized “Daniel”, but he soon realized that the Mzungu agenda was far beyond religion, when they began to undermine his authority among his subjects, that’s why he turned against them and became hostile, which anybody would do. They returned his hostility in the same currency . They fought him, not for religion but for his territory, which is why they had come to Buganda, in the first place – remember, they were on a colonization spree in Africa, after they had lost America, Canada, Australia, South Africa, etc to self rule, after bitter struggles……. Mwanga convicted them of treason when they refused to fight on his (Buganda’s) side and sentenced them to death. Even today, the sentence for treason is death. We need to re-write (and re-read) history from the Ugandan, not British perspective, otherwise, we shall remain colonized for a very long time……’!’’

By the way, when I write or make suggestions about stuff, it does not mean that I strive on being controversial. I just give people something to think about and leave the choice to them. That’s how society should be: free exchange of different ideas. If Kabaka Mwanga's side had been heard, we should not have possibly called 3rd June- MARTYRS DAY, or even celebrate it. The media rarely gives his side of the story, and only concentrates on the other side, and that is unfortunate. In these days of "spin", we should be allowed to hear "both sides” and reach our own conclusions. Better yet if we could be made aware of all the actual facts, not just the opposing viewpoints they generate. What was it president Jefferson said about "a free people, fully informed"?. If I may add, the media hasn't been fair to Idi Amin and Mwanga!