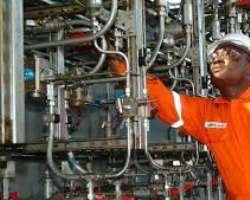 Oil and gas are the natural resources found beneath the soil which could be drilled and refined for industrial, mechanical, technical, and commercial purposes.

surface separating facilities (Usman 2010).
Oil was discovered in 1956 at Oloibiri in the present Bayelsa state by the international oil merchant, Shell D’Arcy.

Nigeria oil and gas sector is divided into upstream, Midstream and downstream sectors. The upstream deals on mining, exploration, exploitation, production, and exportation of crude oil.

Gillies, 2009 outline five areas that stand out as possible loci of corruption in Nigerian oil and gas industry. They are: the awarding of licenses; the awarding of contracts; bottlenecks and inefficiencies; the role of bunkering; the exportation of crude and importing refined products.

Awarding of licenses: Without well-regulated award procedures, the allocation of licenses for

exploration and production might represent possible opportunities for corruption. ‘Nigeria’s Petroleum Act gives the Minister of Petroleum full authority over the allocation of licenses for the exploration, prospecting, and mining of oil.

There are, therefore, no legally mandated processes or oversight mechanisms for the allocation of blocks’ (Gillies, 2009). During military rule, most licenses were awarded on a discretionary basis by the head of state.

The oil block national cake sharing fiesta could take twists according to the mood of the Commander-in–Chief at the particular time (Mashika, 2014).

Awarding contracts: Due to high capital influx in oil and gas industry there is bound to be malpractices in the award of contract within and outside the industry. Gillies, (2009) Oil sectors also involve the award of numerous large-scale contracts, primarily to oil service companies.

Nigerian government retains a high degree of control over such transactions.

Government officials can benefit from procedures that favour companies in which they have a financial stake and officials can also give preference to companies owned by their allies, and then seek repayment through other business deals or political favours (Gillies, 2009).

Though they do not constitute corruption per se, such delays create the motive and opportunity for “greasing the wheels”, or paying bribes to speed along procedures.

Most contracts are subject to a three tier approval process consisting of NAPIMS, the NNPC Group Executive Council, and the NNPC Board, with larger awards also requiring Federal Executive Council approval’ (Gillies, 2009).

The average time for the review of contracts is 24 months, while the global industry average is closer to six to nine months (Ajumogobia, 2008).

This bottleneck ensures that top NNPC officials remain the gatekeepers of the industry.

Protecting this arrangement often contradicts profit maximisation within the national oil company. As a result, its functions remain inefficient, politicised, and susceptible to capture by individual interests (Gillies, 2009).

Bunkering (theft ) of oil
Bunkering is the theft of crude oil directly from pipelines, flow stations, and

Some estimates, however, run as high as 600,000 bpd (Gentile, (2007). It is widely perceived that both government and oil company representatives are complicit in bunkering activities.

Groups of well-armed young men typically execute the pipeline sabotage, but their activities are overseen by powerful figures. Other methods of bunkering (e.g. the loading of more crude than is reported onto export vessels) would likely require some level of official complicity.

Bunkering inflicts serious costs. It lowers the amount of crude Nigeria exports, thereby reducing the revenues which accrue to the state.

The security risks and damage to equipment associated with bunkering dissuade investment into onshore exploration and production (Gillies, 2009).

Exporting crude and importing refined products: NNPC issues “lifting” or export contracts to international oil trading companies, several NNPC-affiliated companies, and a few foreign governments. The traders buy the crude from NNPC at market price and sell it on to refineries and other buyers worldwide.

Similarly, NNPC also awards licenses to import refined petroleum products such as petrol, kerosene, and diesel. These export and import transactions yield high levels of fungible returns, and the lack of transparency surrounding them creates considerable opportunities for corruption (Gillies, 2009).

Petrol and kerosene prices are subsidised by the government. Proponents of the subsidy argue that it represents the only tangible benefit of oil wealth for most Nigerians. The subsidy and weak market regulation create enormous distortions and opportunities for corruption (Gillies, 2009).

Few Corrupt Cases
The frequent increase of corruption cases both in the oil and gas industry and other sectors of Nigeria economy gives room for questioning the efficiency and effectiveness of Independent Corrupt Practices and Other Related Offences Commission (ICPC), Economic and Financial Crimes Commission (EFCC) and other securities agencies.

And as well our judiciary system. James Ibori, former governor of Delta state was discharged and acquitted in a Nigerian court for over 170 count charges in December 2009 filed against him by Economic and Financial Crimes Commission, but was jailed for 13 years in a British court on April 17, 2012 for fraud and money-laundering and for embezzling N12.6 billion.

This exposed the weakness and defects of our entire ( political, legislative,security and Judicial) systems.

A Federal High Court sitting in Lagos ordered the interim forfeiture of 56 properties allegedly bought by former minister of petroleum resources Diezani Alison-Madueke between 2011 and 2013.

The order came two weeks after the anti-graft agency said it had traced N47 billion and U.S.$487.5 million to former minister.

The UK’s National Crime Agency has frozen properties valued at £10 million allegedly bought for the former minister of petroleum resources Diezani Alison-Madueke. Two properties located at Regents Park, along with one in Buckinghamshire, have now been frozen based on the request of Nigerian authorities.

Prosecutors in Lagos began proceedings to recover U.S.$1.76 billion of assets owned by Kola Aluko and Jide Omokore, whose companies were awarded oil contracts by Alison-Madueke.

The documents alleged that companies owned by the businessmen were awarded these lucrative contracts despite being “unqualified” to execute them. Kola Aluko has since been on the run and his luxury apartment has been confiscated.

Punch Editorial Board, (2012) state that two members of the House of Representatives, Farouk Lawan and Boniface Emenalo, were accused of demanding and collecting $620, 000 bribe from an oil tycoon, Femi Otedola, to get rid of his company from the list of those found wanting during the investigation into petrol subsidy fraud.

These are people entrusted with responsibility of sanitizing the oil sector now joining the bandwagon of corrupt public officer. Although, the report revealed how an astounding sum of N2.58 trillion amount in excess of 50 per cent of Nigeria’s current N4.4 trillion national budget was spent on a budgetary item that was supposed to cost the taxpayer just N240 billion.

The probe also revealed that about N1.7 trillion out of the N2.58 trillion could not be properly accounted for and must therefore be returned to the government till ( Punch Editorial Board, 2012).

Mr. Sanusi also said that for all crude oil sales within the period of 2012 and July 2013 the NNPC paid only 24 per cent proceeds into the federation account, and diverted the remaining 76 per cent which cannot be accounted for. It found out that the unremitted misappropriated fund was $20 billion (N3.3 trillion) (Omitaomu, 2014).

The well-known Halliburton scandal involving nearly most of the Nigerian leaders, as shown below, was blown open in Nigeria after a US oil service company, pleaded guilty to paying around US $180 million in bribes to the top Nigerian government officials, to secure four contracts, worth over US $6 billion, to build Liquefied Natural Gas (LNG) facilities in Nigeria.

Nigeria so much depends on the oil sector for her sustainable development and national economic growth, the high rate of corruption in the sector affects all other sectors of the nation’s socio-political economy from realizing their set economic objectives.

Efforts put in place by all levels of governments in the management of corruption in the oil and gas sector are insufficient in eradicating corruption in the sectors. But it seems that the outputs of such efforts are far more than desired (Obioma, 2013).

All anti-corruption agencies should carry out their primary assignment without external influence. They should not be used as a weapon against those who oppose the ruling government.

The award of oil block, contract, licensing and production right should follow due process without government and its agents interference. And the awarding of oil block to individual should be discourage rather they should be awarded to corporate entities with wide spread ownership.

Government at all level should join hands to ensure that the proposed PIB is approved and all its content are implemented for the well being of their citizens, which will help to curb Corruption, either involving public sector actors or enabled by their weaknesses.