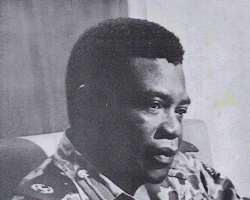 As separatists prepare to remember those who died during the Biafra civil war, the Biafra Nations Youth League, BNYL, has announced every 6 November as remembrance day of Late Vice President and last President of defunct Biafran Republic, Maj. General Philip Effiong who was also the Chief of General Staff of Biafran Army. The group said it will be meeting annually to honor him. BNYL Chief of General Staff and Leader of Displaced Bakassi Youths, Linus Essien made the disclossure today in Ikang-Cameroon border area, Bakassi LGA, Cross River State. He also called on South East and South south Governors to immortalize the civil war hero for the role he played in ending the war that would have consumed the Easterners.

Essien, a native of the ceded Bakassi Peninsula lamented that the civil war hero has been abandoned despite playing the greatest role at the last minute when Ojukwu fled into exile. According to him,Late Gen. Philip Effiong deserves a day of special memorial in the East while dismissing claims by some groups especially in the Ijaw area of Niger Delta that Biafra is limited to the Igbo people. Essien said that the war and the effect of the war affected the Bakassi Peninsula more than any other area.

BNYL had in a press briefing by the Deputy National Leader, Ebuta Takon Akor last week challenged the Ijaw Youth Council, IYC, to engage Nigeria in a civil war as proof that they can stand on their own in the Niger Delta.