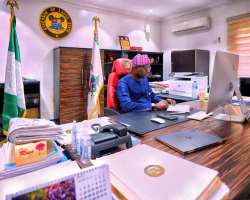 How time flies! The Babajide Olusola Sanwo-Olu administration is a year old. No doubt, the past one year has been an intriguing experience for both the government and the people. Through a combination of strategic thinking and pro-active engagements, the administration has positively impacted on the lives of Lagosians.

The socio-economic landscape of the State from May 2019 till date has been positively altered by the T.H.E.M.E.S (acronyms for Traffic Management and Transportation, Health and Environment, Education and Technology, Making Lagos a 21ST Economy, Entertainment and Tourism and Governance and Security) agenda of the current administration, which was espoused to inspire a ‘Greater Lagos’.

Considering its conviction that the entrenchment of a well-oiled social security system is essential for the evolvement of a better society, the Sanwo-Olu administration has put in place several innovative strategies to address the fears of the people in varied scopes.

Thus, from the ‘BOSKOH Health Mission’ to the ‘Thought for Snacks’ initiative to ‘Sanwo-Olu Cares’ and many other such people-friendly initiatives, the narrative has been that of consistent acts of benevolence to the people.

With the strong impact of the inventive EKO EXCEL training programme, the landscape of public education has been radically altered in the State. An acronym for, “Excellence in Child Education and Learning”, the EKO EXCEL programme is designed to reposition public education in the State and improve method of teaching to meet demands of the 21st century.

In its resolve to develop public education in the State, the current administration also introduced programmes and initiatives such as the home grown feeding for primary school pupils, school rehabilitation, Public-Private-Partnership dialogue, recruitment of 3,000 teachers in public primary and secondary schools and improved welfare schemes for teachers, just to mention but a few.

Farmers have benefitted from partnership with the State Government programme of decentralizing access to inputs such as fertilizer and seedlings as well as access to training in new farming, processing, storage and marketing techniques.

In a record act, 492 allotees received keys to the Alhaji Lateef Kayode Jakande Gardens, a proof that the rent-to-own scheme of the administration is on course. More opportunities have been created for more residents to own houses as four new housing schemes at Igbogbo, Lekki and Badagry have been commissioned.

A network of 30 roads was commissioned at a go in Ojokoro LCDA. 1,017 new LASTMA officers were inducted and deployed to manage traffic at strategic locations across the State. Eight new state-of-the-art ferries were commissioned on 4th February to boost water transportation.

The historic completion of the Continuous Beam Bridge for the Sea-Crossing of the Lagos Rail Line Project at Marina, Lagos effectively signaled the renewal of efforts towards intermodal transport system.

It is quite important to stress that in all its plans, policies, programmes and activities, the people is at the core of every move of the administration.

Thus, as it repairs and enlarges roads, builds hospitals, clears the drains, invests in intermodal transport, empowers more residents, creates more opportunities for economic enhancement and valiantly confronts the deadly COVID-19 pandemic, the foremost drive of the administration has always been to improve the lots of the people.

This is not really surprising, considering the people-centric philosophy of the administration that safeguarding the interest of the people must always be the driving force of government.

This is because of Governor Sanwo-Olu’s conviction that the citizens are the bedrock of democracy. Consequently, the State government has never derided itself of having the monopoly of knowledge with regards to finding the right solutions to the myriad of challenges in the State.

It has, therefore, consistently thrown its doors open to divergent opinions and views from various sources.As a people’s government, the Sanwo-Olu administration has established an effective communication strategy between the government and the citizenry.

This is quite fundamental in view of Mr. Governor’s promise to Lagosians that the core of his government’s policies will be defined by their needs. Consequently, it is apparent that the profound promise to mobilize resources to better the lot of the vulnerable is well on course.

The visible achievements of the administration in terms of infrastructure development, quality health care delivery, environmental regeneration, employment generation, upliftment of the youth, upgrading of public infrastructure, provision of security, entrenchment of law and order among others, have created a sense of relief among Lagosians and, indeed, Nigerians that, at last, they have a government that is capable of delivering enduring positive change, which they have for long been clamouring for.

True democracy cannot exist in a society incapable of supporting the aspirations of its people. With the steady strides of the Sanwo-Olu administration in the past one year, it has been demonstrated that a truly representative government must create the enabling environment for the people to prosper.

There is, indeed, no better way to inspire and actualize the Greater Lagos vision.