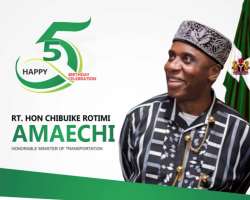 On May 27th1965 in a sleepy village in Ubima in the present day Rivers state, the cry of a baby was heard and a boy was born into a humble family of peasant farmers.

His father like many other fathers was desirous of his son’s surpassing his achievements and so named him Rotimi after the legendary legal luminary, Chief Frederick Rotimi Alade Williams who was one of the nation’s brightest attorneys. His semi-literate dad wanted him to end up as a prominent voice in the Nigerian bar in future and so his name was highly significant. He was also named Chibuike after his Ikwerre tribe.

Amaechi’s humble beginning made him tough from a very young age and his inquisitive mind made a gargantuan impression on his dad who took the time to explain how things worked in his modest farm.

At the relatively young age of 18, he got admission to the University of Port Harcourt where he studied English and Literary Studies and graduated in 1987. He was active in the University’s students’ union which groomed him greatly for the nation’s leadership in the future.

He joined politics at the age of twenty-five while some of his contemporaries were still thinking of what to do with their lives. He was the Secretary for his native Ikwerre council under the banner of the National Republican Convention (NRC). A chance meeting with Dr. Peter Odili in 1988 after his mandatory youth service in Abuja made him work for the latter’s hospital as its public relations officer and two years later, he joined partisan politics under his tutelage and mentorship.

In 1992, he became the Personal Assistant to Odili while the latter was the Deputy Governor of the state as well as the special assistant on youth matters to the then Governor Rufus Ada George at the young age of twenty-six – some months to his twenty-seventh birthday. He was also appointed to the board of Risonpalm.

Tragedy struck in 1993 when the military government of the then General Sani Abacha outlawed politics through the barrel of the gun. Amaechi soon found himself unemployed shortly after his wedding to Dame Judith Amaechi.

In 1996, the maximum dictator lifted the ban on partisan politics as he sought to self succeed himself. Amaechi was then appointed as the Rivers state secretary of the Democratic Party of Nigeria (DPN) while his mentor Peter Odili was made the country’s national secretary of the party.

Democracy returned back to the country in 1999 and Amaechi was elected a member of the Rivers State House of Assembly and became the house’s Speaker at the young age of thirty-four. He held the position for two terms and at a point was the Chairman of the conference of Speakers for the entire Houses of Assembly of Nigeria.

He tasted another Baptism of fire in 2006 when he sought to succeed Odili as the Governor of Rivers state. The primaries was held in Port Harcourt where he won resoundingly only for the then President Olusegun Obasanjo to say that his election had a ‘K leg.’ His ticket was given to his cousin, Celestine Omehia and he was left in the lurch by his friends and associates. Fearing for his life, he relocated his family to the United States while he went to Ghana on a self imposed exile to calm the stormy waters.

His strongest ally at the time was Nyesom Ezebunwo Wike who was the erstwhile Chairman of Obio-Akpor local government. He held forte for him in a similar way that Komla Agbedi Gbedemah did for Osagyefo Kwame Nkrumah while the latter was incarcerated at Fort James prison with common criminals during the heady days of colonial rule in the then Gold coast now known as Ghana.

In a twist of fate, the Supreme Court declared him Governor in October 2007 and he returned to Port Harcourt in triumph.

He buried the hatchet with his political foes by retaining the Deputy Governor, Sir Gabriel Toby and appointing Prince Tonye Princewill the then flagbearer for the Action Congress as a member of the State’s economic advisory council and accepted two nominations from Princewill into his cabinet.

He built numerous primary and secondary schools as well as roads across the state. His policy thrust was infrastructural development and he did more than a yeoman’s job there. His critics were confounded at the massive employment opportunities that his administration created within a relatively short space of time.

He ran into trouble when he had a running battle with the then President Goodluck Jonathan and the First Lady, Dame Patience Jonathan. Matters got to a head when he defected to the then opposition party, All Progressives Congress (APC). Some of his supporters were taken aback as Rivers state has the tradition of being with the government at the centre. He was undeterred and never looked back. He was subsequently appointed as the Campaign Director-General for the Muhammadu Buhari led campaign and he threw himself at the assignment.

History was made in 2015 when for the first time an incumbent lost the presidential election. He was thereafter appointed as the Minister for Transport and he got his hands dirty with some bold reforms he made in the ailing sector. He revolutionized rail transport in the country through the building of the Kaduna – Abuja railway, standard gauging the Lagos – Ibadan expressway, securing of the water ways which has led to a drastic reduction in the transportation of goods via water as well as plans to building the Ibadan-Kano railway.

At fifty-five, he has seen a lot – the good, bad and ugly and has won more battles than lost. He has indeed lived up to his sobriquet of ‘Lion of Ubima.’

We wish him more years in good health and it’s our earnest desire that he is remembered positively by posterity – the ultimate impartial judge.