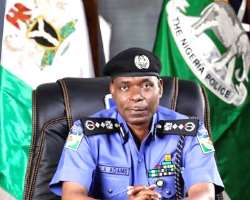 "HURIWA has been urged by Anekeode and Obangene families of Ibagwa Nike Autonomous Community of Enugu East LGA, Enugu State to send a “Save Our Soul” message to the Enugu State Governor Ifeanyi Ugwuanyi, the Executive Governor of Enugu State over alleged unfair expropriation of their land by the Traditional Ruler, Igwe Emmanuel Ugwu in connivance with the Commissioner of Housing, Enugu State, Mr. Vitus Okechi. They made this SOS message through us after they held a peaceful protest on the land and beseeched the Governor to come to their aid."

With the above affirmation, the Prominent Civil Rights Advocacy group HUMAN RIGHTS WRITERS ASSOCIATION OF NIGERIA (HURIWA) has in a media briefing urged the Enugu State Governor Mr. Ifeanyi Ugwuanyu and the Inspector General of Police Mohammed Adamu to stop the misuse of the operatives of the Enugu State Police Command to dispossess the Anakaedo and Obangene families of Ibagwa Nike autonomous community of Enugu East Local Government Area Council of Enugu State of their Choice Lands in what they alleged is a conspiracy by their traditional ruler.

Speaking at a media briefing, the National Coordinator Comrade Emmanuel Onwubiko stated that the Rights group has been informed by the leaders from both families, Mr. Ngwu Ikenna and Chief Kelvin Okwor that the land situate at Ibagwa Nike in Enugu East Local Government Area of Enugu State was the subject of a previous government acquisition. The families made passionate pleas to the then government of Enugu State which returned a portion measuring about 99hectares, back to them.

They added that their happiness was however cut short, when their traditional ruler, who should protect their communal interest, allegedly decided to connive with ill-meaning state officials in the Ministry of Housing using brute force aided by armed security forces to balkanize the little portion of the land returned to them for alleges personal and selfish reasons. They also said that their women had been issued an ultimatum to prematurely harvest and uproot their crops and plants on the said land as the expropriators intend to level the said piece of land on Monday, 25th May 2020. While making this SOS cry, the leaders of the community in a communication with the HUMAN RIGHTS WRITERS ASSOCIATION OF NIGERIA (HURIWA) decried the absence of government investment in their community even after the portions that the government of Enugu State had earlier taken from them. “…schools, hospitals or other developmental projects were never sited in our Community, only to take over our land again for private use” they added.

HURIWA has therefore appealed to both the Enugu State Governor Mr. Ifeanyi Ugwuanyi and the Inspector General of Police Mohammed Adamu to stop forthwith the unconstitutional resort to self help measures by the named Housing ministry officials of the Enugu State government in connivance allegedly with their traditional ruler to take over the possession of their ancestral land which is a grave violation of human rights as provided for in chapter 4 of the Constitution of the Federal Republic of Nigeria of 1999 as amended with specific reference to section 44 and 45.

HURIWA stated that the Right to own property includes movable and immovable property. Moveable property as legally defined by those who should know includes any material object that can be owned while the immovable property the constitution envisages here is land according to a reputable website on human rights. It also must be noted that immovable property will also include ground beneath any object under the surface in it's natural states like minerals and vegetation immediate space above the land surface.

It is important to also include objects place on and under the land by humans.

If a person satisfies all requirements to own or sell property in Nigeria, s/he cannot be refused and in such circumstance, he can enforce his/her right, says lehal experts in an opinion paper published in Know your Rights. HURIWA subscribes fully to these legal views and in this vein is appealing that those who by inheritance and ancestry owns the aforementioned lands in Enugu must never be deprived unlawfully of their entitlement to their Right to Property. "

Relatedly, HURIWA alerts the Inspector General of Police Mohammed Adamu that the Delta state Police on Tuesday arbitrarily and illegally arrested four journalists, including members of the Warri Correspondents Chapel of the Nigeria Union of Journalists (NUJ) in Delta State.

They are Matthew Omonigho of the DAILY POST, Edeki Egafe of the News Agency of Nigeria (NAN), Francis Sadhere of Business Day and Christopher Odomhe, a freelance journalist.

HURIWA asserted that from available information from dependable sources, the reason for their arrest is not known yet even as the Rights group said Police operatives stormed the Press Centre of the Warri NUJ along Gbiaye Street in Warri at about 3:45 pm, picked and detained Omonigho for undisclosed reasons.

HURIWA stated that: " As soon as the illegal arrest happened , the NUJ leadership dispatched Edeki, Sadhere and Christopher to visit the Police Area Command in Warri to ascertain why Omonigho was arrested.

On arrival, officers detained the three journalists seeking information on their colleague.

Mobile phones of all four were also confiscated by the operatives.

In spite these, the detectives from the Force Headquarters declined to give reasons for the illegal detention.

HURIWA recalled that the NUJ Chairman in Delta, Comrade Michael Ikeogwu, confirmed that the officers stormed the Press Centre and saw our correspondent.

"They were looking for another reporter. They collected Omonigho's phone, saw the person's number and arrested him.

"When some journalists went to the command, the officers, again, checked their phones, saw the person's number and arrested them."

Ikeogwu condemned the arbitrary arrest, phone seizure and confinement without a warrant.

HURIWA stated that just like the Delta state NUJ chief, the Prominent Civil Rights Advocacy group HUMAN RIGHTS WRITERS ASSOCIATION OF NIGERIA (HURIWA) has called on Nigerians to pay attention to the impunity going on in the country, adding that the NUJ will provide an update on the matter. The Rights group said these journalists must be immediately freed and heavy compemsations PAID to them for these violations of their fundamental human rights as provided for in chapter four of the Constitution of the Federal Republic of Nigeria of 199 as amended..