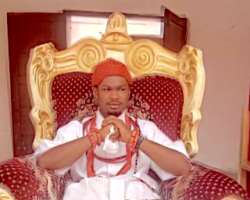 Facts have emerged on why the proposed Hausa market could not scale through in Issele-Uku Kingdom, the headquarters of Aniocha north local government area of Delta State.

The proposed Hausa market was birth by one Mrs. Mary Eboigbe, the proprietress of DEMA Kitchen, to be set up in the community.

At a final meeting at the Oligbo Royal Palace, Issele-Uku, with the woman who claimed that she bought the land and wanted to convert it to a private Hausa market, the Obi of Issele-Uku Kingdom, Agbogidi Obi Nduka, who presided over the meeting disclosed the decision of the community to her.

The Royal Father who tongue lashed the business woman for insulting the community and desecrating the land with her foul language of being untouchable even as a stranger, told her that the market cannot be situated in the town and that she should tell her Hausa traders already killing pigs and cows for sale to move away from the place.

Obi Nduka cited various reasons why private markets cannot exist in Issele-Uku without traditional procedural modalities and consensus of the people of Issele-Uku.

First, he said that Issele-Uku holds their Afor market in high esteem and can never cave in to any pressure from any quarter for any illegal market to be set up, insisting there are traditional reasons for not allowing any other market in the town except Afor market or as otherwise decided by the community. He said the people of Issele-Uku ascribe so much traditional respect to Afor market as something kept sacred for centuries by our forefathers and had never been broken by anybody not to talk of strangers.

Secondly, he cited security reasons. He said the land in question is located at the Benin-Asaba expressway, a location where armed bandits had regularly kidnapped persons and terrorized the community.

Thirdly, he said that the land belongs to the community and designated for development. He said all the land from the Ministry of Works to Costain area in that axis belonged to the community and wondered why anybody would have sold it to somebody who wants to bring in people that were dislodged from Abraka market for breach of security.

The Obi who earlier asked Mrs. Mary Eboigbe to produce the document used to purchase the land, insisted that the survey plan she produced did not amount to evidence of ownership. He ordered her to produce the land documents to enable the community take up a case against the person who sold a community land to her.

Agbogidi Nduka also used the medium to appreciate everybody who tried in one way or the other to intervene in the matter, adding that the issue had finally been put to rest as the community had decided not to allow another market in the town other than Afor market.

The traditional ruler therefore sounded a note of warning to those who engage in trespassing on community land to desist from such or be dealt with.

He reiterated that according to the laws and traditions of Issele-Uku, before anybody, indigenes and non indigenes alike can possess a purchased land, the person would have presented drinks to the village that owned the land and then would have obtained a land ownership certificate from the palace.