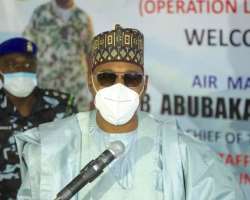 The Borno state Governor, Professor Babagana Umara Zulum has urged Nigeria Air Force to support, provides cover and enabling environment for famers for effective and efficient farming in this rainy season period which has already began.

He also stressed that NAF’s commitment against terror invasion on farmers will address multifarious challenges facing the people and the state. The Governor made the call at Luncheon hosted by Chief of Air Staff, Air vice Marshal Sadiq Abubkar to mark the end of blessed Month of Ramadan at 108 composite Group Maiduguri, Borno state capital.

Gov. Zulum expressed readiness to grant whatever support to Nigeria Air Force in its efforts to bring the end of Boko Haram/ISWAP in Borno state and Northeast Nigeria with aim to restores sustainable peace. Nothing the sacrifice, and patriotism of Nigerian Air force in neutralising Boko Haram/ISWAP elements for prospective development On his part Chief of Air Staff Air vice Marshal Sadiq Abubakar disclosed that they will soon be commissioning Helicopter landing pad and refueling facilities in Damaturu, Yobe state capital to continuously provide support to the ground troops instead of refueling in Maiduguri.

Air Mashal Sadiq also disclosed that NAF cannot come back to Maiduguri and refuel and as well return to the operation in Yobe state. Adding that all other important equipments would be made available in Damaturu for sustained operations. He also noted that they would continue to work in synergy with other security Agencies for peaceful coexistence.

The Chief of Air Staff said that most of his operational visit to Maiduguri is not only to sustain operation but also to provide up to date training for the Airmen to continue fighting insurgents in Borno and Northeastern states. He expressed profound gratitude to Governor Babagana Umara Zulum for honoring their invitation and his continuous support to Nigerian Air force.