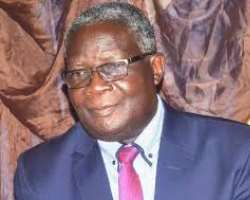 My dear Prof. Abimbola,
Greetings to you and all yours sir. I am certain you're keeping safe in this Corvid-19 era.

It is my belief that this letter would not come to you as a surprise after my acknowledgement of some issues you raised about the Oòduà Nation and on which I promised to shed light to the best of my ability.

It is so gladdening to learn that you are "really a convert to the idea of Oduduwa Nation." As God lives, and with the abundance of His Grace, we shall get to this Promised Land, Amen.

I also read in the early part of your missive that you "liked Nigeria and the benefits accruable from its size and abundant resources." Yes sir, I was in the same boat of mirage until my beliefs about Nigeria began to be challenged in 1985 while I was in Makurdi - Gboko - Katsina-Ala Axis in 1985 and 1986. I also empathize on your disappointment with the stillbirth of the Restructuring. It was on the account of its expectations that I had several meetings with the former Vice President, Alhaji Atiku Abubakar and spent about ten months in Nigeria in 2018 at great personal cost. I had believed in it. Tried my best in my small way working with others to convince many of our leaders. But here we are.

On the issue of caution that you spoke about and which my brother, Adewale Longe has been advocating, I am on the same page with you sir. In my article titled "Yinka Odumakin: The Afenifere Bouts of Bitterness," I had written inter alia:

"The next generation appreciates caution. It is part of our culture and training to be cautious and show restraint. The next generation understands the need to tread carefully. But treading carefully is not the same thing with stagnancy of action and edification of expired ideas."

I quoted from this article sir, because it was my most recent publication before this exchange. The idea of caution has been part of our ethos from day one. So, we are on the same page sir.

You expressed reservation about how Prof. Banji Akintoye emerged the "President/Leader". Prof. Akintoye is the Leader of the Yorùbá World Congress and not the Leader of Afenifere. The trajectory of his emergence in that regard, I came to learn after the fact. Thus, I would rather leave that alone.

Suffice to say that based on my limited knowledge of History, every struggle always throw up the relevant leader at the right time. Some forces, controlled or uncontrolled, would coagulate to propel such a decision that more often, would and could be shocking. Prof. Bank Akintoye might have been a product of such Historical variable. There was a vacuum, and the intervening forces used him to fill it.

Then you asked sir, whether he was "holding fort for a younger person who is currently hiding in the wings?" I am not in position to answer that question. I however believe that the emergence of a successor should not be stage-managed even though, it has to be organized for the purposes of smooth and rancourless transition. When the time comes, it would be properly taken care of by the prevailing forces.

But I disagree sir, with your suggestion that he is the one "saddling himself with that responsibility." He was "chosen." He was not really there when he was elected by those present. Those who elected him must have seen something in him. Since he still possesses the physical and mental capacity to engage and offer what he has got, we should let him.

On his relationship with Afenifere Leader, Pa Reuben Fasoranti, to the best of my knowledge, this remains in good stead. Same goes with some of the other leaders. But one could not say the same thing in relation to some younger elements within the Afenifere Group. Their grouse seemed to have stemmed from the fear of a contending force within the Yorùbá space. Since they are always queueing, some of the younger elements might feel their ambitions threatened.

They are the ones that are hewing the limitless sour grapes. They are not able to rise above their pettiness in the interest of the Yorùbá Nation. They have made conscious efforts to destroy Prof. Bánjí Akintoye, maligning his name, spreading malicious rumours and making unfounded allegations against him and the Yorùbá World Congress.

To me, the most important thing is the Yorùbá national interest. It is not about Afenifere. It is about moving Yorùbá Nation forward in whatever way that is most feasible to the realization of the greatest happiness of the greatest number of our people. If this is the objective of the Afenifere, they should stop fighting the YWC and work with Prof. Akintoye.

As to your concern sir, about fragmentation among the self determination groups in the Yorùbá Nation, my response is to advise that you contextualize the current struggle in History. If you do, you would be more encouraged and, in fact, be fired up, sir.

Let us take the French Revolution for example. On the surface there were about 14 different Groups. They included the Society of the Friends of the Blacks, the Royalists, the Jacobins, the Monarchies, Cordeliers, Society of 1789, Girondins, Feuillants, La Plaine, La Montagne, Dantonists, Herbertists and Thermidorians.

Almost, if not all of these groups also have competing sub-groups fighting it out with each other to overthrow the feudalist monarchy.

Every group had its own ideas about what the goals of the Revolution were and which course France should follow. They struggled to carry out these plans at the cost of other groups. Various kinds of groups played different important roled, such as citizens' clubs, parliamentarians, governmental institutions and paramilitary movements.

Even in the initial days of the Revolution, the fight was furnaciously fierce as they preyed on each other to gain prominence. But at the appropriate time, there was coagulation forced on them by the exigencies of national survival and need for progress.

In Russian Revolution, we had the Bolsheviks (the Red Army), the Melsheviks, the Decembrists, the White Army, the Green Armies, the Black Army and the Socialist Revolutionary Party among several others.

Contained within these organizations were also groups fighting for control and agenda setting.

In Iranian Revolution of 1980, the groups, before the success, include the National Front, Tudeh Party of Iran, Iranian People's Fedai Guerrilla, Freedom Movement of Iran, The People's Mujahedin of Iran, Combatant Clergy Association.

Many of these also had sub-groups. Even, the Khomeini Group that eventually turned victorious had so many groups within its set up that had to be harmonised at the right time.

I can go on and on, giving you examples around the World. In fact, I plan to do a more detailed piece for purposes of education and enlightenment on this subject.

So, what is happening in Yorùbá Nation today is not unique. It is part of the process. We should allow a thousand flowers to bloom. The struggle itself, at appropriate time would force the necessary coagulation to occur.

Sir, for now, I would stop here. In the Part Two of the letter, I would address other issues that you raised.

In the meantime sir, think about the following words: