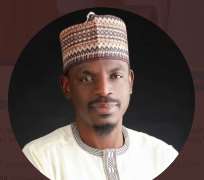 Foremost Civil Rights Advocacy group-: HUMAN RIGHTS WRITERS ASSOCIATION OF NIGERIA (HURIWA) has called for the dismissal of the Personal Assistant to President Muhammadu Buhari on New Media for making derogatory and contemptuous comments towards the Federal High Court and for claiming to have the power to influence decisions of Courts as he deems fit..

"HURIWA is hopeful that by now as he celebrates the end of the Holy Ramadan in a beautiful relaxation in the Presidential Mansion in Abuja, that President Muhammadu Buhari would have read that Bashir Ahmed, Special Assistant to President Muhammadu Buhari on New Media, had promised a Twitter user to intervene in upturning the conviction of a Nigerian court. Is Mr. President also aware that these tweets by his employee was made about the time that the Federal High Court in Yenagoa, Bayelsa State, had sentenced Yunusa Dahiru (Yellow) to 26 years imprisonment for child trafficking and sexual exploitation of Ese Oruru and we hope Mr. President remembers the story that the teenager Miss.. Oruru was reportedly abducted by Dahiru in Bayelsa in 2015 as a 13-year-old before being taken to Kano State where she was allegedly forcefully married and impregnated by Dahiru. Mr. President must have learnt that a Twitter user, Hammad Yusuf Saleh, had asked Ahmed to intervene in upturning the conviction by the court which he says was manipulated and these were the conversations: The tweeter user Hammad Yusuf Saleh tweet reads, "Please Bashir, do something about Yunusa Yellow for Allah's sake, he is wrongly accused and sentenced, the whole matter is manipulated, we need to appeal for him."— HAMMAD YUSUF SALEH (@Al_ansariy_) May 22, 2020and In response, Ahmed said, "My brother, I do not have the power to do anything against the judgment of the court, but I will try to contact those whom I think are capable."

HURIWA recalled that the said Special Assistant Bashir Ahmed when he sensed how angry other tweeter users had become about his claims to have the contact to influence the decision of the Court of law then wiped off his earlier tweet and re-tweeted that he was unaware of the ingredients of the said matter of abduction of the teenage Miss. Oruru by Yinusa the Keke rider.

HURIWA in a media Statement by the National Coordinator Comrade Emmanuel Onwubiko and the National Media Affairs Director Miss Zainab Yusuf said the implication of the assertion of the Presidential aide is that the current Executive arm of government has the capacity to arm-twist the judiciary and can as well write court decisions for the judges from the offices at the Presidential villa.

"We consider this subtle admission of the near-infinite capacity of the Presidential aide to predetermine the decision of the competent courts of law as a grave threat to constitutional democracy and has rubbished the sanctity of the nation's court system except and unless the President Muhammadu Buhari-led administration comes out clean and state the official position on this verbal assault on the Judicial arm of government by one of his assistants in the person of Bashir Ahmed. President Muhammadu Buhari should immediately sanction his misbehaved Assistant by sacking him from his job and to assure Nigerians that indeed his administration is not tele-guiding the judges of the Court systems at the Federal level. If this is not done then Nigerians will have no choice but to accept what Bashir Ahmed told us that as an official of President Muhammadu Buhari that he has the contact that can extrajudicially fix the decisions of Courts of Nigeria which is a grave violation of the principle of separation of powers recognised by the Constitution and specifically section 6 of the Constitution of the Federal Republic of Nigeria of 1999 (as amended)".

of that person; (c) shall not except as otherwise provided by this Constitution, extend to any issue or question as to whether any act of omission by any authority or person or as to whether any law or any judicial decision is in conformity with the Fundamental Objectives and Directive Principles of State Policy set out in Chapter II of this Constitution; (d) shall not, as from the date when this section comes into force, extend to any action or proceedings relating to any existing law made on or after 15th January, 1966 for determining any issue or question as to the competence of any authority or person to make any such law.”