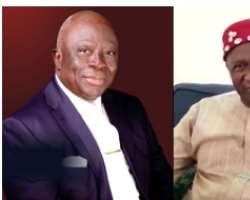 - Adebanjo, Nwodo, Mimiko
...Buhari is not sincere in keeping the country together says Adebanjo

President-General of Ohanaeze Ndigbo, John Nwodo, Elder statesman and Afenifere leader, Chief Ayo Adebanjo and former Governor of Ondo state, Dr Olusegun Mimiko have disclosed that Nigeria is operating an illegal Constitution forced on the people by the military.

They spoke at video conference organized by Governance Index tagged, "Coronavirus Pandemic: is it time to reevaluate the political structure of the country”.

Opening the session, Nwodo said the constitution was given to Nigerians by the Military government which was not elected adding that in 1999, politicians went into the election without knowing the parameter that will guide the democratic process.

He said the Military wrote the constitution for us and abandoned the agreement that our forefathers had with British before the Independence which was to operate a regional government.

At the video conference which was the fifth in a series of the weekly conference series: 'Covid-19: Turning a crisis into opportunities', being sponsored by the Governance Index, the President General of Ohanaeze Ndigbo said that Nigeria's political parties operate like companies owned by shareholders where there is no freedom to choose the candidates of your choice.

He said the Nigeria electoral system is the most corrupt, the judiciary is compromised, while Nigerians have no confidence in the electoral process.

Nwodo said, "We have never made constitution for Nigeria, it was given to us by the Armed Forces Ruling Council of the Military government, which was not elected, the composition of its legislative body was not chosen by any parameter known to anyone.”

"They wrote the constitution and abandoned the agreement our forefathers had with British when we got independence, for a regional based government in which every region has its security, its own economic development, with each exercising sovereignty over its resources and paid taxes to federal government to run common services for the federation, but today it is no longer the case.”

"Boko-Haram has completely paralysed our military and rendered them incapable of fulfilling their constitutional obligation to defend our Sovereignty, there is mutual distrust between the South and North, I mean far North, excluding middle belt. Working through your farms in any part of Southern Nigeria or the Middle belt has become a very frightening phenomenon.”

Nwodo lamented that “our children who take up self-determination exercises without carrying arms are called terrorist organization, but herdsmen who are on rampage, who loot, kill, and rape are treated with kid gloves while their leaders threaten us in the Social media”

He added that “98 percent of heads of security personnel in the South East are non-indigenes,” and as a consequence, there is poor security in the region.

"Some of us that were trained in Europe and America, we know that in global parlance, local policing is the basis for any territory security. You have to know your territory, you have to speak the language, but if you post people to our area who do not know the terrain of the place, cannot speak the language, the situation is threatening the very fabric of our nation, that is why I am very happy to be part of Southern and Middle belt forum, which is saying we don't have a very valid constitution in Nigeria.”

“We have got to restructure this federation and return to a constitution that is top notch, a Constitution made by the people, validated by a plebiscite, and voted for by the people. We must have a proper census of Nigerians, and not of Nigerien who crossed our borders and got to National Identity Management and claimed nationhood and that have no parentage in this country."

Also, speaking at the session, Chief Adebanjo, the Afenifere leader agreed "totally" with the position of the President-General of Ohanaeze Ndigbo, and added that if we are serious about keeping this country together, it is time to restructure back to true federalism.

He said, “The present constitution is an imposed constitution by the Muslim Military in the North. Nobody contributed to it. Even General Abdulsalam said he did not know what is in the constitution before he swore-in (fomer president) Obasanjo.

"I will say without any hesitation we are all deceiving ourselves, (President) Buhari is not interested in keeping this country together that is why we are having this problem, that is why we are putting square pegs in a round hole, and that is why we tell him to keep to the constitution by the appointments he is making, but he said; no, I can only work with people I have confidence in, which is against the Federal Character Principle that the whole country is talking about. Buhari simply turn deaf ears to the agitation for restructuring that has been on for over five years.”

"All these arrangement we talking about now, he (Buhari) has never find an occasion to address it, even his military colleagues have now agreed that we should restructure, all his predecessors have agreed, all political parties have agreed, even his political party has agreed and yet Mr. President who says he is sincere has not said anything, he (Buhari) has private programme, he has a programme of his zone."

“There is no sincerity on the part of Far North in putting this country together when people like me talk about the Unity of the country, I have gone through it.”

He explained that what was in the independent constitution is for each federating Unit to be autonomous adding that through the independence constitution, Chief Awolowo was able to do a lot for us in the western region like free education, free medical services.

Adebanjo accused elder statesman, Alhaji Tanko Yakasai of hypocrisy for saying that proponents of restructuring have not explained to Nigerians what restructuring entails.

Recall that during last week’s 4thedition of the video conference also organised by Governance Index, Yakasai had said the agitators of restructuring should come up with modalities for their proposal for proper scrutiny.

According to Adebanjo, “once there is injustice there can be no peace and when there is no peace, no equity, there will be no development. All things we are doing now is to play up to an individual.”

He wondered how could we have a democracy in a country where the party that is ruling is not democratic citing the issue of Ondo and Edo governorship elections where the expression of interest form cost N22 million.

In his contribution, former governor of Ondo State, Dr Mimiko concurred with the position of Adebanjo and Nwodo on the restructuring agenda, adding that if we want to keep this country together there is need for us to restructure.

He said, "I associate myself with the positions of former speakers, and whether we like it or not in this country, restructuring is an idea whose time has come."

Other speakers at the video conference included Afenifere spokesman, Yinka Odumakin, Ms Ankio Briggs, and Mr Chido Onumah among others.