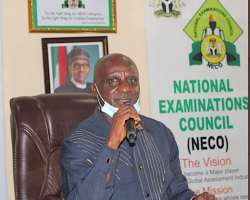 Ogah claimed that Economic and Financial Crimes Commission(EFCC), Independent Corrupt Practices and Other Related Offences Commission(ICPC) and Presidential Panel have been probing the new NECO Registrar for various corrupt offences and wondered why the President should appoint him.

But Ogah said Obioma's appointment was an error and the greatest mistake the President has ever made in his administration .

In a statement issued in Abakaliki, Ebonyi state capital, the only APC National Assembly member from Ebonyi state, argued that the Ebonyi REC doesn't deserve the appointment as according to him, he worked against President Buhari and APC in year's presidential election.

He alleged that Professor Obioma’s led INEC in Ebonyi state reduced the President votes and left only 20, 000 votes for the President in a bid to give former Vice Presdent of the country and the President’s rival, Alhaji Atiku Abubakar victory at the poll but that Buhari still triumphed despite votes manipulation at the poll.

He further alleged that Obioma transferred the Electoral Officer of Ezza south local government when she refused to do his bidding and changed the result of that local government against the APC.

Ogah said "it is on record that EFCC, ICPC and Presidential Panel are probing Obioma for frauds. So, his appointment is the greatest mistake our President has made.

"Those who recommended him for President are promoting corruption and denting the image of Mr. President who has vigorously fought corruption in this country.

"How can you appoint a man who worked against our party and Mr. President himself in 2019 general elections by reducing the President votes in my Ikwo local government? My people fought tooth and nail to ensure that our President was not defeated in Ikwo and he later won despite Obioma's massive reduction of APC votes in Ikwo.

"Is it my own election that he did not rig in favour of my opponent? Every other National Assembly results in that 2019 election in Ebonyi state was announced by the Obioma led INEC immediately the election was concluded but my own took almost two days before it was announced after the result was manipulated in favour of my opponent. They reduced my votes with over 10,000 votes and declared my opponent winner of the election, what an electoral fraud?

"I didn't accept that fraudulent result, I challenged it in tribunal and won. My opponent proceeded to Appeal court in Enugu and that court also declared me the rightful winner of that February 23rd National Assembly election in Ezza south/Ikwo federal constituency.

"Today, the Ebonyi REC is rewarded with this sensitive/juicy appointment to continue his fraudulent acts, what a mistake by our President when he ought to have been punished for electoral fraud.

"I am urging Mr. President to cancel this appointment and give it to any person that deserves it because the person currently appointed was a big mistake by the President and therefore he should be removed and replaced with any other person that does not have corrupt tendencies like Obioma.

"Let me say without mincing words that whoever that recommended Obioma for this appointment is an enemy of Ndigbo and the country in general, otherwise why recommending a person of Obioma who should be properly investigated for fraud?”.