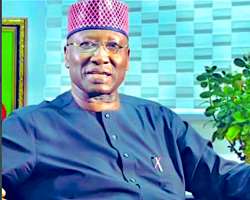 The leadership of APC Mandate Defenders has condemned in strongest terms the latest attempt by some vested interests working in collaboration with some unpatriotic government officials in the ministry of power to thwart the reform efforts of President Muhammadu Buhari as well as the sustained media attacks and blackmail against the Secretary to the Government of the Federation, Mr. Boss Mustapha for insisting that due process as contained in the Public Service Rules of the nation be observed.

In a statement released to newsmen in Abuja on Sunday by the national publicity secretary of the group, Mr. Ifeanyi Emeka, the group said, the SGF is been attacked and blackmailed because he is executing the directive of Mr. President saying an attack on the messenger being the SGF is also an attack on the sender being President Buhari.

The group recalled that at the end of the two-day Presidential Retreat for in-coming ministers held last year at the Presidential Villa Abuja, President Buhari directed that all executive matters should be forwarded to him through the Secretary to the Government of the Federation while admonishing the incoming ministers to work collaboratively and purposefully with their subordinates to achieve quicker results.

His words: ''You will find that working collaboratively and purposefully will enable us achieve quicker results, recognising that four years is not a very long time.''

However, the news of some ministers and chief of executives working at cross purposes in their respective ministries at the expense of service delivery has become nauseating inspite of the fact that the main duty of a minister is to articulate and guide the implementation of Mr. President's or government policies in his ministry as well as represent it at the Federal Executive Council meeting.

But some ministers now see themselves as lord over their subordinates instead of working together to achieve Mr. President's vision and plans for the country.

Just recently, the immediate past female managing director of an intervention agency of the Federal Government said she was removed by the minister in charge of her ministry simply because she refused to yield to the minister's unpatriotic and irrational demands from her.

We have seen several instances where unnecessary bickering and personal differences between a minister and a chief executive have brought embarrassments to the government inspite of an existing public service rule which had already addressed the issue.

Therefore, to put an end to such embarrassing situation, the Secretary to the Government of the Federation, Mr. Boss Mustapha whose duty it is to monitor, supervise and coordinate the effective implementation of Federal Government programmes and policies, decides to remind ministers of an existing process to be followed before any chief executive is be removed.

In otherwords, it is only the President who is the chief employer of both the minister and the chief executive that have the right to fire anyone working against his vision for the country.

Contents of the Public Service Rules was not written by Boss Mustapha but was formulated by the Government of Nigeria to ensure effective service delivery and prevent arbitrary removal of any chief executive who a minister does not like his or her face as well as to promote national interest over personal interest.

Is it something that should warrant the barrage of attacks and campaigns of calumny against the SGF by some vested interests and influence peddlers in the power sector?

Between yesterday and today alone, we have seen several sponsored publications against Boss Mustapha calling him all manner of names as well as alleging several unsubstantiable claims against him just because he insisted that the right procedure must be followed before a chief executive of any government agency is removed.

While we don't want to engage these shenanigans in the ministry of power working hand-in-glove with vested interests to thwart the reform efforts of President Muhammadu Buhari, we advise the elements involved to throw-in the towel if they cannot abide with the reinforced rules of public service in the country rather than remaining in the system and be attacking the messenger and the sender of the message.

We therefore urge Nigerians to ignore the rants, fabrications and lies of these shenanigans who are opposed to doing things right in the country we all love.