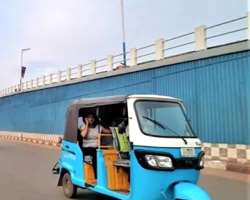 Tricycle operators and bus drivers have gone against the number of passengers they should carry as directed by the Delta state government during the Coronavirus saga.

The operators go against the state government's order particularly from 6:30pm when law enforcement agencies have relaxed on the government directives.

It was observed that tricycles coming from Okpanam to Summit, Anwai and Nnebisi road axis of the state capital carries full load going against social distancing order which is aimed at preventing the spread of the disease.

It took The Nigerian Voice Correspondent over an hour to board a tricycle whose operator observed the government's order from the National Television Authority (NTA) junction or McDonald's Junction to Nnebisi road on Tuesday at about 7:12pm after closing from a meeting.

It was also observed that at that period of time, though the police are visible on the road patrolling but they don't search for defaulters.

The compulsory use of the facemask was also violated at that period as several passengers onboard tricycles were on their bare faces.

A taxi which also dropped at the same junction to drop and pick passengers didn't observe social distancing measure neither was the driver nor his passengers wearing their facemasks.

At Koka junction, the Mini buses conveying passengers to Ibusa junction and Ogbegonogo market also flout the two passengers at the back, centre and a passenger with the driver at the front order.

They pick three passengers at the back and centre as against the order of government.

Our Correspondent who was coming from across the express from Koka junction boarded a mini bus with three passengers at the back and centre but decided to disemberk from the bus after he raised alarm which fell on deaf ears and boarded a tricycle whose rider obeyed the social distancing order.

It would be recall that following the relaxation of the lockdown for economic activities, the State governor, Dr. Ifeanyi Okowa, instructed that transporters should carry two passengers at the back for tricycles, two each at the back for taxis and mini buses and for 18 seater buses not more than 10 passengers with the driver.