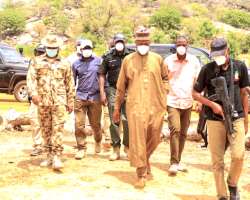 Senior officials including some secretaries who currently oversee Local government affairs were conspicuously absent while some secretariats were empty when Governor Babagana Umara Zulum undertook a surprise tour of six local government areas in southern and central Borno state to monitor the quality of governance at the grassroots and to assess ongoing projects.

A statement issued Friday by the Special Adviser to the Governor on Communications and Public Relations Strategy, Malam Isa Gusau said with no one guessing his destination, the Governor departed Maiduguri on Wednesday and he drove to Chibok, Bama, Gwoza, Damboa, Konduga and Askira-Uba where he passed the night before heading back on Thursday evening. The State Government had two weeks ago, directed top government officials and senior civil servants to report to work after easing its lockdown to prevent spread of coronavirus. Even before COVID-19 outbreak, senior officials at local government areas in Borno are notorious for abandoning their local government to operate in Maiduguri only to return there for few days when FAAC allocations are received, or when they know that the Governor is heading there.

Zulum took the clever officials by surprise this time because not even his security details thought he was travelling far from the state capital under the Ramadan and with Sallah around the corner.

“None of the heads of department is around, neither the Secretary nor the other principal officers are reporting to duty. Look at the Secretariat, termites all over, an indication that nobody is operating in the Secretariat. Government cannot allow this situation to continue. "We came from Maiduguri to determine the presence of senior public servants at their places of work. We have been pleading with them for quite sometime, to be operating from these local government areas so that citizens will feel the impact of governance at the grassroots but from all indication, many are not listening. We will take punitive measures because we cannot allow this system to continue” Zulum said at one of the LGAs.

Governor takes roll call
Governor Zulum had in each of the six local government areas, visited council secretariats and took roll call of absentee secretaries, heads of department, directors and other ranking officials. He however has not announced punishment yet.

While conducting the roll call on Wednesday, Zulum inspected projects being carried out by the state government in Konduga, Bama and Gwoza. In the three places, ranking officials were mostly not on ground. Gwoza’s new secretariat, which the Governor commissioned few months ago, was even locked up.

Zulum’s next destination was Askira town which is the headquarters of Askira-Uba LGA. He passed the night there. The following day, the Governor moved to Chibok and Damboa towns. About 16 projects at various levels of completion were inspected by the Governor during his two day visit across the six LGAs. ... Emirs on ground while officials absent
Meanwhile, Emirs of Bama, Gwoza, Uba, and Askira Emirate councils were all on ground during the Governor’s impromptu visit to their palaces. Zulum paid them homage to encourage them.

During a brief remark at Bama Emir's palace, Zulum announced that any house in Bama not occupied in two weeks will be temporarily allocated to IDPs pending when the owners are ready to occupy them.