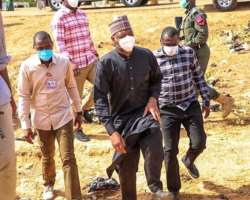 The Director of Press, Governemnts House, Mr. Ndahi Pimdar Sawa in a statement Thursday made available to The Nigerian Voice said Govenror Zulum gave the directives during an unscheduled visit to four Local Government Areas Wednesday and Thursday.

Recall that the world wide fasting period is just less than two days to end when the State Governor embarked on an unprecedented visits to konduga, Bama, Gwoza, Askira/Uba , Chibok and Damboa Local Government Areas.

The governor carries out the tour of these Local Government Areas on working days and during working hours but surprisingly, most of the Local Government Council Secretariats visited during the official working hours were virtually empty despite governments directives that officers on grade levels thirteen and above should report to office for work.

Surprisungly, some Local Government Council's were even locked off completely as the entrance to the secretariats could not be accessed by the governor and his entourage which he said was unacceptable.

Govenror Zulum also during the visit paid courtesy calls on the Shehu of Bama, the Emir of Gwoza and that of Uba as well as Askira who were surprised to Recieve him and his entourage on the visit but thanked the Governor for his developmental efforts at the grassroots.

The governor also thanked them for their fatherly role in ensuring that civil authorities are instituted at the grassroots most especially in the areas that were severely ravaged by the Boko Haram insurgency.

He assured them of governments total support for them to succeed, adding that he has already fulfilled most of his electioneering campaign promises to them like construction of government lodges in Gwoza and Askira as well as repairs of Government Secondary Schools in all the LGAs visited while government was also making frantic efforts to begin the construction of drainages in Gwoza and Askira towns to control erosion this year.

For a speedy process to return to civil rule at the grassroots, the governor also gave orders to all the emirs that all traditional title holders in their domains must return to their respective Local Government Areas and stay with their people, warning that failure to do so will attract penalties from the state government.

He also said that as soon as the global pandemic of coronavirus is over, all schools will be reopened. Highlights of the visit includes inspection of completed and on going projects in the LGAs visited.