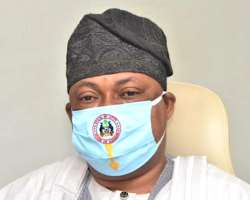 According to the letter by the Governor, Oyetola nominated Barrister Segun Oladitan as the Chairman of the commission.

He directed the nominees to submit copies of their Curriculum vitae to the Assembly not later than Thursday. He said their screening would be on the floor of the House on Wednesday 27th of May.

The Speaker expressed displeasure of the House of Assembly with Charms PLC for refusing to furnish the Assembly with the details of its activities with the state.

He held that the House had written to the organization requesting for the detailed report of its dealing with the state for the fiscal year.

In his words, "it is quite disheartening that Charms PLC has failed to turn in the report of the company's activities with the state despite several letters forwarded to the organization by this honourable House.

"We are hereby handling down our last warning to Charms as we might be weilding the big stick should the company failed to do the needful this time around.

"Should Charms feel to big, we as a House of Assembly will not hesitate to recommend that the state government disengage the services of the firm". The Speaker stressed.