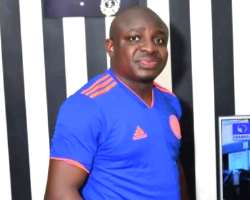 Delta state governor's aide on Youth Development, Comrade Elvis Majority Akpobi, has noted that with youth empowerment, insecurity would be a thing of the past in Nigeria.

Akpobi, who Shed light on the possible way the country could come out of the challenge when each person shows love to his neighbor, it would give hope to the hopeless.

Akpobi, who is the Convener, #NotTooYoungToLead Initiative, noted that if everyone begins to light the candle of one another, in no distant time, everywhere would be lightened up.

Speaking in Asaba, on Monday in this exclusive interview with The Nigerian Voice, the #NotTooYoungToLead Convener, who doubles as the Special Assistant to the state governor on Youth Development, noted that as citizens, every youth has their role to play to end insecurity.

He noted that the president, governors and house members alone would not be able to end insecurity or fix the problems in the country, "You and I as citizens have our little role to play to fix the country. So, every youth should swim against the tides and always see possibilities in every impossibility".

According to him, if our leaders begins to empower the youth and the chain continues, insecurity would be wiped out of the country in no time.

"I know it is not easy for the Nigerian youth because I was once there. But you see this land, this land is fertile. It is time that we start thinking of solving problems than always criticizing. Though we have leaders who are not meeting up to expectations but we should ask ourselves questions. You in your little space what are you going to do if you become a leader?

He insisted that in whatever we do, the interest of the community, state and country where we are should first be taken into consideration.

"The foundation of everything you do is key. If you teach someone something over time, the person become used to it", noting that what he does today is a replica of what his boss, the Principal Secretary to the state governor, Hilary Ibegbulem learnt from the state governor and bequeathed it to him.

"Our society today will be at peace if one person lights the candle of another person and like that before you see everywhere will become a shining light.

He disclosed that 70 percent of those in various crimes are the youth, saying "there is nothing more dangerous than a helpless and a hopeless young person. It is a ticking time bomb because it will explode one day as he does not see any value in himself. He doesn't see anything around him that inspires him and nobody comes around to say how are you doing?

He disclosed that he has been able to touch many lives through the instrumentality of the Principal Secretary, "I know I have touched many lives with my boss on several occasions. It wasn't me that did it but I helped to amplify the voice and the needs of that person.

"If we really want peace in Delta State, when people are calling on the governor here and there, the governor will not leave government house to be feeding people. It is like a train, the people he has empowered will in turn empower other people in their environment. It has a ripple effect on the family, community and the state".

While appreciating his boss for the platform given to him which has a multiply effect, he said it has become a culture in his life to empower people around him, "I don't have a bank account filled with money but I have a bank filled with networks of good people".

He revealed that he and his team in collaboration with his office, has embarked on projects including buying of school bags, sandals and notebooks for less privileged children in a school in Ajegule, Clever Minds pupils in Edjeba, stressing that the school has benefitted about three times from the initiative.

"Outside that, during this period of the pandemic, we have provided facemasks last week. Because of the lockdown, we know how it is for young persons even those that makes their money daily, we provided paliative to some youths".

The SA on Youth Development, noted that there are a lot in their black bag to offer, pointing out that Not Too Young To Lead, was just waiting for the lockdown to be over to release mind blowing projects for young people.

"The aim is not to make noise but to empower a handful of young persons that will in turn share their stories that will inspire and empower others. It is like a chain and that is what we are doing", he stated.

He reiterated that the society today would be at peace if one person lights the candle of another person.