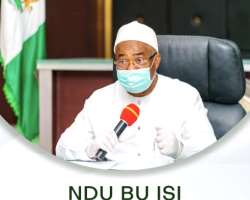 The Governor of Imo State, Senator Hope Uzodimma on Saturday announced the discharge of three patients who tested positive to Covid-19 infection in the State.

Addressing newsmen at Government House Owerri, Governor Uzodimma informed that out of the six cases undergoing treatment in the Isolation Centre in Imo State, two were discharged at the weekend while the index case was discharged earlier, bringing the total to three (3).

He explained that all the three already discharged tested negative twice according to Nigeria Centre for Disease Control regulations.

The governor further explained that the number of cases currently under treatment in Imo State as at today is only four (4).

Governor Uzodinma further informed that so far, there are no new cases of COVID-19 patients recorded in Imo State according to NCDC.

On Friday, the Governor appealed to the people to abide by the directives already given by the government and the Covid-19 Task force in Imo on how to be safe and reiterated his resolve to do all within his constitutional powers to protect the lives of Imo people.