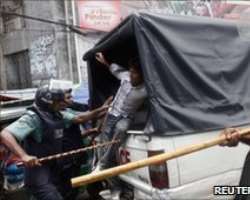 Police and opposition protesters have clashed in the capital of Bangladesh, Dhaka, amid the country's first general strike for more than three years.

The strike was called by the opposition Bangladesh Nationalist Party and its allies to highlight the government's “failures and excesses”.

It is seen as the first significant challenge to PM Sheikh Hasina since she took office in January 2009.

The BBC's Mark Dummett in Dhaka says most Bangladeshis have heeded the strike call.

Public transport and most businesses remained shut across the country.

In Dhaka, our correspondent adds, the usually busy streets of one of the world's most densely populated city are empty and only police have bothered to go to work in large numbers.

The BNP and it ally, Jamaat-e-Islami, accuse the government of failing tackle corruption and improve services.

They are also demanding early elections.
Bangladesh is due to hold parliamentary polls in 2013.

Prime Minister Sheikh Hasina, who leads the secular Bangladesh Awami League, said on Saturday: “The BNP and its stooges are out to frustrate democracy and create anarchy.”