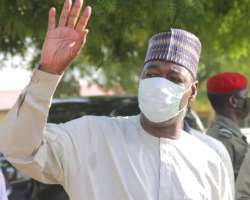 552 Borno ex-workers who retired from 2016 to April 2020 have been enrolled for pension payments following the directive of Governor Babagana Umara Zulum.

Borno State Head of Civil Service, Barr. Simon C. Malgwi, stated this at a press briefing on Saturday in Maiduguri.

Mr Malgwi stated that Governor Babagana Umara Zulum, haven been considerably disturbed by the pension problems in the state, had to personally intervene in order to address the problem and ensure a hitch-free system of pension administration in the state.

The Head of Service explained that the 552 pensioners enrolled are inclusive of the 387 complaints received from the Nigerian Union Of Pensioners received on Thursday, 12th March, 2020, during a public hearing that was presided by Governor Zulum in Maiduguri.

He noted that about 90% of the pensioners have so far been cleared and paid their one month pension and the payment will continue after the process of their enrollment into pension scheme is fully completed. The remaining 10% were largely not captured either due to non-reporting for the exercise or for being deferred for further investigation and necessary or appropriate action. This, he said, is as far as the 387 pension complaints received from the Nigerian Union of Pensioners.

Meanwhile, Mr Malgwi attributed the lingering pension crisis to a number of administrative factors and some unavoidable challenges on the part of the pensioners. This he said includes: failure to provide correct details, particularly in respect to bank account numbers and BVN, cases of fraud and unsavoury activities, deliberate overstay in service beyond the mandatory years of service or retirement age, collecting both salaries and pensions at the same time, impersonation, improper replacement and overpayments, cases of the next-of-kin not reporting death of pensioners to government until ATM expires and become stranded among others.

Mr. Malgwi further assured government's commitment to offset all pension and salary arrears that are verified to be genuine, stating that there is no cause for alarm as no genuine pensioner who has worked for the state in any capacity and entitled to pension will be denied his or her legitimate retirement benefits.

He However called on civil servants to always process their retirement in good time to avoid unnecessary delays as government has put in place a system of automatic migration, from salary to pension whereby, all fresh retirees would have their pension in the month immediately after retirement.

Mr Malgwi also on behalf of the Borno State Government appreciated cooperation from the Nigerian Labour Congress, the Nigerian Union of Pensioners and the pensioners themselves who have ensured the smooth and successful conduct of the exercise.