Elders Do Not Have To Die Alone Without A Friend 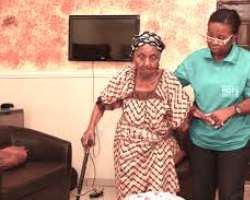 Humans are social animals, living, acting in duo, in groups and in communal societies. Nevertheless, those few that are more comfortable as loners keep their own company and function independently as individuals. As they get older, weaker or in sickness, it becomes more difficult for everyone to function efficiently well. This is the point where we cannot do without the support of younger relatives and caregivers. Thank God for African culture that makes elders a valuable part of their communities.

Who remains around everyone as we get older depends on the decision we made earlier when we are still active and capable. Others leave that choice to God. African cultures take care of their elderlies within homes but other cultures leave it to the Government and build nursing homes for their senior citizens. Whatever decision we made earlier in life by building our retirement nest, as conspicuous or careful spenders or being unfortunate may determine how we end up.

The deadly advent of Covid-19 has turned old people's group homes to virus breeding grounds and turned them into scary places for the elderly as the most developed systems overseas get overwhelmed. Out of caution and safety for the elderly, they have been isolated and the Covid-19 has taken its toll. More so within the elderly than any other age group. In Europe, America and even Asia, healthcare has been stretched to the limit and it is being rationed leaving the elderlies to absorb the worst brunt of it.

African countries have the complex of copying everything practised around the world. Nursing homes serve a need in most communities but Africans elders are doing fine without them. This is why it is difficult to ignore the ostracization of the elderly in the face of Covid-19 in Europe and America. We do not neglect or sacrifice our seniors in Africa. Our politicians wasting our resources overseas can picture the beds they prepare for themselves because that is where they are going to lie.

Sometimes elders are not looking for sexual relationships but they want a younger company they can bond with, especially when their own children have left home or they have lost their partners. There are court battles for the custody or visiting right to see grandchildren after falling out with their children. So, when grandparents become too weak to care for themselves, they can hardly cope with toddlers giving their parents more than a handful. The bond between humans does not automatically cease after getting to our fifties to seventies.

What decision could these elderlies make to ameliorate their loneliness? There are a few circumstances in the case of an old partner who passed on, in which case, the children would approve a new relationship. Even in these cases, men more than women take new partners. Men are not strong enough to survive wives alone. Some African cultures have widows that could take another young woman as company. The type of relationship it is, well beyond the scope of this article.

We can hardly find children that would approve an amorous relationship between their parents or grandparents with a partner. There was a story of children that kidnapped their father just before engagement to a young lady. Rich older women (known as cougars) have been able to secure young men as partners to the disdain of their kids and communities.

Relationships with children change over the years as babies become older and turn into rebel teens demanding more persuasive power to behave. As they get older they drift away from their fathers; lovingly towards their mothers who rely on husbands to enforce curfews and give out incentives rather than punishments. Usually mothers are more supportive and useful to the grandkids. The days we talk proudly about our strict fathers are gone. They call that abuse today.

On the other hand are grown children that refused to leave home. There was a saying that: this is my father's house, go back to your father's house. Even when they eventually leave, they are always back to raid their parents' house for groceries or any portable item. In most cases, with the approval of their mothers. The poor fathers only know when they need the items.

We all like to marry a man or woman we can grow old together with. Unfortunately, it becomes difficult to take care of one another as we get older. It later creates a burden for one partner to deal with alone or after the death of a partner. If we all have a choice between young caretakers and someone we have an amorous relationship with, the preference is clear.

Well, as the parents get older, it is not uncommon for children and grandchildren to seek outside help for their parents, abandon grandparents to the care of nursing homes overseas, relatives or help back in the villages. Parents may lose control and authority of the new environment they find themselves. They are put under the watchful care of health and food givers. What they do before losing control especially when active may determine the rest of their life.

The parents or grandparents that took up the opportunity when still active sexually or not, have been able to avoid being relegated to the background as they get older. Their younger partners have been there to take care of them and fend off anyone trying to take advantage of them. At the same time, there are also cases of abuse by younger partners too, creating a battle between young partners and relatives. Especially, when good money or inheritance is involved.

There was this older man who met a gorgeous lady that gradually developed into platonic friendship. The young lady was surprised when the elderly man made a sexual move. She joked that if that ever happened and got pregnant for him, she would regret later, after he was gone. They got along so well, friends nudged them on. This is where security and wealth make a difference. Who is she going to blame if he is not around to take care of their kid?

Solution: leave a security blanket for the child upkeep and schooling. He obliged and guaranteed her what he considered enough as long as she remained loyal. He actually forgave the mortgage on the apartment he bought her in his will but after he is gone; like one Governor of New York or like M. K. O Abiola who bought girlfriends that had a kid for him, one house each. Either way, that is, dead or alive, the young lady had a peace of mind if she really cared about him. Let us be realistic, many older men that are still sexually active are without the means to guarantee the future upkeep of the babies they bring into this world. In some cultures, the kids' mothers are dispossessed by the man's relatives.

The care a partner receives at home cannot be compared to the one outside their houses. Caregivers figure that if a man is still sexually active, he should be able to stay at home. Otherwise, reports of grandpa and grandma making out at night when supervision is at a minimum cannot be avoided