Covid 19: The Insensitivity Of The Nigerian Government For Thailand Returnees 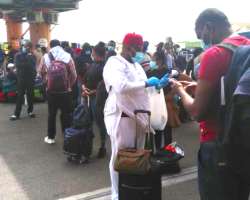 Migration from one country to another is as old as man. We remember the Biblical Cain who had to go on exile to a foreign land after his cruel murder of his brother, Abel. Still talking Biblically, Abraham was called by God when he was 75 years old to leave his father’s house to a land he will show him.

The United States of America is built on migration both by the forced one during the gory Trans-Atlantic slave trade which saw millions of Africa being shipped to the New World and voluntary which saw Europeans fleeing religious persecution and others desirous of wanting to live a better life.

During the highly corrupt regime of Nigeria’s self acclaimed Maradona, General Ibrahim Badamosi Babangida, millions of his countrymen were forced by his adverse economic policies to go on exile to different parts of the world. The popular destinations were the United States, United Kingdom, Canada, Australia because of the non existence of a linguistic barrier and many of the economic asylum seekers received their education there before returning ‘home’ to contribute their quota to nation building. Others simply opted for far flung countries in Asia and Europe where they had to contend with a gargantuan language barrier and culture shock.

Nigerians in the Diaspora have grown in leaps and bounds and their financial contributions to the Nigerian economy runs into billions of dollars annually. They have become a huge force to be reckoned with. Some of them have chosen the risky journey to salvaging the nation by relocating back home after a successful economic sojourn abroad. Others have simply chosen to contribute their quota to the ‘Giant of Africa’ from their respective bases abroad.

The covid 19 has proven to be a merciless leveler as the so called developed nations are toiling day and night to keep it at bay. Who could have thought that the US with all its healthcare sophistication could be battling hard to contain the pandemic and have the worst rate in the world – over eighty thousand deaths as at the time of this writing? The UK has now overtaken Italy with having the highest casualties from the dreaded virus.

Some Nigerians in the Diaspora have chosen to return home as they feel it will be in their best interest in view of the harsh reality of the pandemic. Some Nigerians in the US, Saudi Arabia, UAE have been successfully evacuated and they are in the various self isolation centres across the country.

It was highly disheartening that the Nigerian government told her citizens based in Thailand that they had to pay a whopping 297,000 naira to the government before they can be airlifted back home.

Premium Times reported that there was a letter from the Head of the Nigerian Chancery there, Nicholas Uhomoibhi and dated May 14, 2020 which read: “Dear prospective evacuees, I am directed to bring to your attention that due to measures that are beyond the control of the COVID-19 local organising team in Nigeria, all evacuees going to Nigeria henceforth are to now pay (for) quarantine, isolation, accommodation centre or hotel before departure and arrival in Nigeria.

“Kindly note that the rates were negotiated in Nigeria and the embassy has been directed not to airlift any evacuees who fail to pay the fees.”

This is highly insensitive and cruel of the Nigerian government. It is bad enough that there is no care for the plight of Nigerians in the Diaspora; worse still that it wants to fleece these people of their hard earned funds in the middle of a fatal pandemic. If not for the successive corrupt governments both military and civilian, many Nigerians won’t have any business being resident abroad especially with its attendant challenges which makes some of them live like sub humans.

The Nigerian government is simply irresponsible. We recall when many Nigerians were butchered to death by blood thirsty mobs in South Africa. They simply looked the other way and it took the kind hearted intervention of the Chairman of Air Peace, Allen Onyema to evacuate some of them who were willing to return home free of charge. What manner of government do we have that has no thoughts for the interest of her citizens abroad?

It is no surprise that the best and brightest of minds regularly turn their backs on their so called motherland called Nigeria which will leave you in the lurch when the chips are down.

I read an interview granted by John Fashanu where he disclosed that he gets a monthly pension of five million naira monthly simply because he got only two caps in playing for the Three Lions during his hey days as a professional footballer. The likes of Francis Obikwelu who won laurels for Nigeria had to switch allegiance to Portugal and Daniel Igali wrestled for Canada when they got an ill treatment from the land of their birth.

I make a passionate appeal to the Federal Government to rescind that anti-people decision and freely evacuate her citizens there. There must be the presence of the government in their lives. Come to think of it, some of them would have lost their means of livelihood no thanks to the pandemic and so how on earth will they be able to raise close to three hundred thousand naira in this trying time?

What happened to the Abacha loot that has been recovered? Why can’t a miniscule portion of it be devoted to helping these stranded victims of circumstance? It is unfair for them to pay out of pocket in lieu of the billions of naira that has been raised by the private sector to adequately fight the dreaded virus.

We must resist the cruel exploitation by the government who simply don’t give a damn as to the fate of her citizens. After the 14 day quarantine, they will be discharged and bear the financial burden by themselves pending when they return back to their adopted base. Is it too much for their bills to be picked for just two weeks?

What then is the essence of paying taxes and being law abiding if the social contract as espoused by John Locke is something strange here?

This injustice to our Asian based brethren must stop!