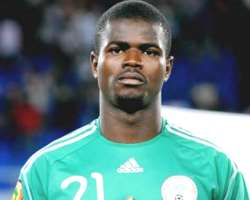 Super Eagles left back, Elderson Echiejile, has challenged his former teammates alleging they were asked to pay for spots in order to make the National team prior to the 2014 FIFA World Cup in Brazil.

Echiejile, who was part of the Eagles squad that won the 2013 Africa Cup of Nations in South Africa missed out on the 2014 World Cup in Brazil due to injury have said it's either those alleging mention names of the people who demanded money from them or remain silent.

"It's very ridiculous with these allegations going round, and I wonder why the names of these people are not mentioned"

"They should call out those who asked for bribes. As for me, I played under the late Amodu Shuaibu and Stephen Keshi and there was no time they asked for money from me to be included in the team" Echijile said.

Many Ex-internationals have weighed in on the trend, with some asking Obasi, Igiebor, Emmanuel Sarki and the likes to reveal the names of those who asked for money.

Former Super Eagles striker, Emmanuel Emenike, have condemned Obasi's allegations, saying the late Keshi rejected an honorarium he offered him when he signed an endorsement deal just after Nigeria qualified for the 2014 World Cup in Brazil.

Also, Godfrey Oboabona said he was not asked to pay any amount to make the trip to Brazil for the 2014 World Cup.