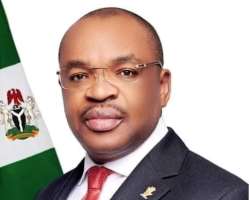 Having gone through an news story credited to the Chief Medical Director of the University of Uyo Teaching Hospital, Dr Ememabasi Bassey, that Akwa Ibom State Government is not testing enough COVID-19 suspected cases, one is tempted to be worried.

Why would the state refuse to conduct adequate test on suspected cases and why is Dr. Bassey, a former Commissioner for Health in the State, so quick to be on the media on such a delicate issue.

On face value, one would be tempted to assume that the state now has abundant test kits and testing laboratories which it is refusing to deploy. But cursory analysis shows that the otherwise is the case as there are not enough test kits sent across to states by Nigerian Center for Diseases Control, NCDC, to carry out Covid-19 testing and the CMD cannot be said to be unaware of this. In fact, I recall that the NCDC DG sometime ago cried out that there are no test kits in the country to carry out aggressive testing. The UUTH is a Federal referral center and should naturally be the reference point in the management of the novel disease, with over 4 ventilator and isolation center. But the CMD is on the media crying wolf instead of getting the federal government to perform its responsibilities. Over the last couple of weeks, it has been confirmed that even when samples are sent to NCDC for testing, it takes more than a week to get the results. It is either reagents or whatever is not available and the results come in trickles.

The CMD should know better than making a show on radio in regards to this. He should not make it look as if COVID-19 is an Akwa Ibom thing. The entire world is being ravaged by this pandemic and the problem associated with it has been the issue of adequate testing samples. And that is why the NCDC and indeed many other authorities in the world have maintained that only symptomatic cases should be tested. Further investigation shows that testing of COVID-19 Samples is not as easy as one thinks because the symptoms of COVID-19 are similar to that of common malaria, and the number of samples sent in by various states on a daily basis is quite huge, hence delays in sending back results.

Recall that the US President Donald Trump had once promised to carry out testing of samples in millions per day, but ended up being mocked by the world because he could not achieve such. He didn't even achieve 1/4 of it.

Perhaps what the UUTH CMD should be reminded is that the same NCDC had awarded Akwa Ibom 99% in contact tracing which shows the transparency by the State Government in the fight against COVID-19. Methinks that the CMD of UUTH should be more informed with these facts than a common man, and hence appreciate the efforts of the state Government in fighting the pandemic. If anything, why is it easier for Dr Bassey to visit and sit in a radio station for one hour when he wouldn't spend up to five minutes in reaching out to his colleague and current Commissioner for Health, to register his concerns.