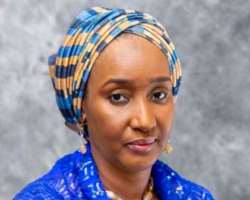 The Prominent Civil Rights Advocacy group-: HUMAN RIGHTS WRITERS ASSOCIATION OF NIGERIA (HURIWA) has accused the federal ministry of Humanitarian Affairs of planning to feed ghost pupils as they planned to proceed with the School Feeding PROGRAMME even as schools have been on an emergency vacation due to COVID-19 LOCKDOWN for nearly two Months.

HURIWA has therefore called on the President of the Senate and Chairman of the national legislative assembly Dr. Ahmed Lawan and the Speaker of the Federal House of Representatives Mr Femi Gbajabiamila to halt the sinister attempts to misapply public funds under the guise of feeding Children when it is a universal truism that the Nigerian Pupils are not in Schools and millions of these school children may have been relocated from their original residences as a result of the circumstances and inevitable movements thrown up by the health emergency that was occasioned by the CORONAVIRUS PANDEMIC IN NIGERIA.

"From where do they want to get the pupils to feed whilst the lockdown is in place? Are they going to bring up displaced almajiris as the bonafide pupils or will they as usual manufacture ghosts as pupils? These School children have all gone to their homes and millions of these kids may have been relocated to towns other than where they reside with their Parents or guardians. Why is this government so incorrigible and resistant to the truth? Why can't the government do first things first but would press on with a muddled up plot to divert public funds under the guise of feeding school children and by the way shool children who are not in Schools are not school children so the Independent Corrupt Practices and other related offences commission and the EFCC if they are patriotic enough should question the Federal Minister of Humanitarian Affairs for pretending to feed SCHOOL CHILDREN when there is no school in session and assuming without conceding that there are children to be arranged and fed, those are not school children because school children are found in schools and not from all corners of the streets when the schools are understandably on vacation."

HURIWA recalled that the Minister of Humanitarian Affairs, Hajia Sadiya Farouq, has said that the school feeding programme will be implemented despite the closure of schools nationwide even against the factual background that Schools across Nigeria have been closed for about seven weeks to check the spread of COVID-19.

HURIWA in the media Statement by the National Coordinator Comrade Emmanuel Onwubiko and the National Media Affairs Director Miss Zainab Yusuf said that even the Federal Minister of Humanitarian Affairs Sadiq Farouq reportedly admitted before the investigative session organised by the Senate PRESIDENT Dr. Ahmed Lawan and the Speaker of the Federal House of Representatives Mr Femi Gbajabiamila that she does not have a fuller understanding of the modalities for proceeding with the implementation of the School Feeding PROGRAMME when these schools across the Country have since closed down due to the CORONAVIRUS PANDEMIC IN NIGERIA just as we are completely shocked that this same person who only few weeks back admitted that she was unaware of how to proceed with the School Feeding PROGRAMME surprisingly told the bewildered nation Yesterday that the School Feeding programme that is ravaged by administrative and operational corruption of a monumental proportions would go on today."

HURIWA stated thus: The minister was quoted as saying that talks with state governors to ensure the continuation of the programme as directed by President Muhammadu Buhari has commenced.

Recall that she said this while responding to questions at the joint national briefing of the Presidential Task Force in Abuja few weeks back just before she honoured the invitation to the executive session of the national legislature during which both leaders of the two chambers of the parliament lambasted her office for not been able to check the corruption that has delegitimised the implementation of the School Feeding PROGRAMME of the federal government just as she admitted inheriting the allegedly corrupt bureaucracy running the programmes under the Social investment programme which started in 2016 long before she became a minister."

HURIWA also expressed disappointment that the ministry of Humanitarian Affairs is pressing ahead with the School Feeding PROGRAMME which is a component of the Social investment programme which she reportedly admitted is fraught with corruption even without first and foremost eradicating the corruption in the system and drawing up a believable and credible data of the genuine beneficiaries of all the segments of the programmes embeded within the Social investment programme.

" HURIWA strongly believes that if this school feeding programme goes ahead now that school children are scattered all over the place and are not In schools, it is a perfect alibi for massive scale of theft and diversion of public fund by these officials who will simply feed GHOST PUPILS and thereafter siphon the funds. We recall that during the last encounter between the National Assembly and the ministry of Humanitarian Affairs there were unanimity of positions that the implementation is marred by large scale corruption. Recall that in his opening remarks, Senate President Dr. Ahmed Lawan said, “When for example, some conditions are set that those who will benefit will have to go online, through the internet or BVN and the rest of it.“I want to tell you that the majority of those who are supposed to benefit have no access to power. They have no access to Internet. They have no bank account, so no BVN. Now with Coronavirus, they need our attention more than ever before. The time has come that we review the ways and manner we deliver the services under the SIP to Nigerians. Corroborating the President of the Senate, the Parliamentary Speaker Mr. Femi Gbajabiamila, who told the minister that she was right now in the eye of the storm because all eyes are on her, said, “Your job right now, is probably the most important as we speak, because you are saddled with the responsibility of alleviating ‘poverty’ or the hardship, due to no fault of anyone, being thrust upon Nigerians, and I know that you came into a system, or you met a system that has nothing to do with you, but what we will be asking you to do is for you to change that system.”

THE Rights group further stated that the School Feeding PROGRAMME will not be credible if it goes on now bearing in mind the fact that even the pliant Speaker of the All Progressives Congress dominated National Assembly confessed that the relevant Committees in the House have been complaining bitterly even before the Minister took over the scheme about inability to access information about the scheme just as he said Nigeria’s SIP is similar to the Unemployment Insurance Act in the UK and the Social Security Act in the US.There is a lot of take away from this COVID-19. One of them is the International Best Practices. My point is that these things are backed by law. They are codified by the legislature".

HURIWA recalled that in his last recorded broadcast on COVID-19 President Muhammadu Buhari had stated thus: “Furthermore, although schools are closed, I have instructed the Ministry of Humanitarian Affairs, Disaster Management and Social Development to work with State Governments in developing a strategy on how to sustain the school feeding program during this period without compromising our social distancing policies".

HURIWA believes that there are no valid school children to be fed now but the announced intention to proceed with feeding school children who are not in school is a systematic and well choreographed plots to steal public fund by officials of government even going by the fact that the Minister reportedly admitted that the system is not transparent enough during her meeting with the national parliament. This must be stopped, HURIWA stressed.