Illegal Miners And Criminals: The Invasion Of Ìjèsà Land. 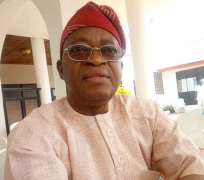 "Caring for myself is not self-indulgence, it is self-preservation, and that is an act of political warfare."

- Audrey Lorde
"Do not set yourself on fire just to keep other people warm."

- Elyana Rausa October 6, 2017.
It is already out of control. The pillaging locusts are here. In their legions, they have landed and are still landing. They are ravenous. They are voracious. They are ferocious and are avaricious. Their edacity is mind-boggling. Their cupidity is seriously unsettling. Their greed is garish. They are egregious gullutons of our underground wealth. They are mindless. And ruthless.

Deprived of decency, decorum and respect for the aesthetics of our existence, they brim with luciferous disdain for nature. They are vicious viruses vitiating the beauty of our environment. They flail with flagrant profligacy, shamelessly swimming in esurience, and with delectation, daring us to stop them if we could. They prankishly poke our noses, kick our bellies and twist our arms behind our backs at will, riding roughshod over our land, our heritage, our wealth, raising dour dusts of misery and poverty in their trails as they laugh their ways to the banks and to their countries.

The Osun State Government headed by Mr. Gbóyèga Oyètólá seems confused and discombobulated over this matter. It seems paralysed and petrified. It seems dazed and daunted on this all important issue. It seems castrated and anesthetized. It does not know what to do. It seems to be arid of meaningful ideas to tackle the situation. If this Government had any ideas, it is evident that, contrary to its recent reputation, it is scared to the marrows to execute them. It is gutless in taking the bull by the horns to protecting our lands, our people, our farms, our heritage. Where it had reportedly acted, it has been feeble and flabby. It has been half-hearted.

The Local Governments too have a role to play. One is surprised that up till now, no leadership of any of the local government areas concerned have been seen to be actively involved in the mitigation of this invasion or leading their people in seeking genuine solutions. What are they doing in those offices if they could not respond to this important matter? Are they cinctured by the leadership at the State level? Are they acting out the script written for them by the State Government of Mr. Gbóyèga Oyètólá? If not, what is going on?

Does it mean that they are collaborators with the invaders? Are they willing tools in the compromising of our lands and heritage? Have they no qualms about the activities of the criminals in our land? Why are they silent and inactive? Or have they done anything that the general public is not aware of? Have they passed on the concerns of their people to the Governor? Have they called his attention to the apprehension and fears of our people?

Are they waiting for our people to take laws into their hands in order to brand them as violent and rascally? Are they unwittingly trying to exacerbate the subsisting anarchy by their inactions? Why and how are they comfortable in the face of this wanton invasion and criminalities occasioned by illegal mining? Don't they care at all? Why are they not piling pressure on their Governor to take action on this serious matter?

We could not say we are expecting any intervention from the Federal Government. We should not and must not. We must as a matter of urgency become the captains of our own souls. This is a local matter that had to be dealt with at the State level. It is part of the extant wrongs in our system because I know that mining rights have been wrongfully appropriated by the Federal Government. Even then, those miners are crooks and criminals operating outside the confines of the law.

They are economic bandits. They are social marauders. They are gangs of predators operating without any scintilla of restrictions because they are taking advantage of a lack of serious governance at the Federal level. Yes, we have absentee Presidency. What we have are incompetent goons gallivanting around in Aso Rock. They are bouncy bozos abjured of any basic knowledge of governance and any sense of responsibility. To wait for them in Ìjèsà land would be very suicidal. It would be utterly ruinous.

Kábíyèsí should also mobilise the elites of Ìjèsà land. He should bring them together to pick their brains and come up with solutions. He should proceed to align their solution (s) with the ones provided by the Lojas and rulers of the domains in focus. Get the Elégbéjegbés activated and mobilised. Tap into the patriotism of our people to save our lands and our people. There is need for an organised resistance to this invasion. There is no more time to dilly-dally.

In this task, Kábíyèsí and our leaders should be guided by the counsel of an American Author and late Professor at the University of Wisconsin, Aldo Leopold, that we "examine each question in terms of what is ethically and aesthetically right, as well as what is economically expedient. A thing is right when it tends to perserve the integrity, stability, and beauty of the biotic community. It is wrong when it tends otherwise." This is the kernel of the issue. These mining activities are destructive of the integrity, stability and the beauty of our existence. We must put an end to them by every means necessary to preserve Ìjèsà land, our land, our heritage, our community and our existence as it were.

Kábíyèsí should be rest assured that he would have our people behind him in the honest efforts to rid our land of criminals and invaders. He should be rest assured that his leadership would be valued and appreciated. He should not worry about errant chiefs in the kingdom. With the power of the people behind him, all the chiefs would fall in line. Without much ado, Ewé agbéjé á mó won l'ówó.

With whatever solutions that come out of these efforts, the Government of Mr. Gbóyèga Oyètólá could be availed of meaningful direction and imbued with the needed backbone to act in the defence and protection of our people. Things could no longer remain in abeyance regarding this matter. The status quo could no longer subsist. There is an urgent need for serious action.

We should raise a Task Force to act as instrument of sanitization. The Task Force should be able to get the men and women of the Nigeria Police Force to tow the line of enforcement on our behalf. We know that a big chunk of the NPF is corrupt. But breathing down their necks could and would produce some results. The TF should start by asking for the mining licences. Anyone or any company that has none must be made to leave immediately in less than twenty four hours or be arrested as the case may be. If such isolated person or group of persons refused to leave and are seen around again, they should be visited with "further consequences" within "the confines of the law."

Those backing both the legal and illegal miners must be isolated. Those that needed to be called out for sordid deeds must be called out and exposed. Any police officers at middle and higher levels providing coverage to these criminals must be challenged via group efforts and openly too. Such law enforcement officers should be made to feel unsafe in our midst, because at that point, he or she is a criminal. As Elyana Rausa had posited a few years ago, we should not be required to set ourselves on fire just to keep others warm. No. It does not, should not and could not work that way.

As to the internal collaborators with these invaders and criminals, there is a social network with which our fathers have reined in their likes before. This should be employed to bring them to their senses. Their failure to comply would have serious social consequences as concomitants. At all levels, it should be made clear to the internal collaborators, whether they are local chiefs or not; whether they are Government officials at any level or not, regardless of their status, that their days are numbered. They would be made to account. The day of reckoning would come. As internal enemies, their acts of treacheries and perfidies would not be over looked. The price would be heavy.

It is unfortunate that the name of Oònirìsà, Oba Adéyeyè Eniitàn Ògúnwùsì, Òjàjâ II, is being bandied about in the fueling of this criminal activities. We are all hoping that this is not true or correct in anyway whatsoever. For if it were true, that would be too sacrilegious to be overlooked or be forgiven. The Oòni of Ifè should make deliberate and open efforts to distance himself and his revered throne from any form of aiding and abetting the perpetration of illegal mining in Ìjèsà land or any part of Osun State.

It is time for us all to get engaged and rid our land of invaders and criminals. It is not an undue expectation to expect the Government to protect us and rid our land of criminals and invaders. But if the Government would not help us, we should begin to think of how to help ourselves. This is our land. This is our heritage. It is ourselves and our peoples that are being victimised. It is time to stand up for ourselves. It is time to protect our lands and our people.

In whatever action we decide to take in the face of this glaring vacuum of responsible and effective governance, we are very much justified. This is because, the first law of nature is self-preservation. In acts of self defence of our lands, our people, our farms, our heritage, we would not have committed any crime, no matter how tenuous. The time for action is NOW.