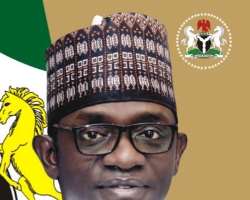 Victim Support Fund (VSF) has donated Medical Equipments and Consumable Drugs to Yobe State Government as part of it’s support to victims of COVID-19 in facilitating the fight against the pandemic in the state.

The donations were made through the Yobe State Emergency Management Agency (YOSEMA), Executive Secretary, Dr. Mohammed Goje who received the donations from VSF officials on behalf of the State Government.

The Executive Secretary of the Yobe State Emergency Management Agency (YOSEMA), Dr Muhammad Goje presented the items to the State Commissioner of Health, Dr. Muhammad Lawan Gana who also later handed over the equipments and drugs to the Logistics and Supply Pillar of the State Rapid Response Team headed by the Executive Secretary of Yobe State Drugs and Medical Consumables Management Agency, Pharmacist Abdul’aziz Garba Muhammad who officially received the items donated on behalf of YODMA.

The State Commissioner of Health, Dr. Mohammed Lawan Gana in his remarks, thanked the Victims Support Fund (VSF) for supporting the state at this trial moment when the state was s in dire need of such support.

Dr. Gana however assured that the items donated will be judiciously used for the purpose it was meant for while pledging to disclose the date of the distribution of the items across the 17 LGAs of the state.

He noted that Yobe State Drugs and Medical Consumables Management Agency (YODMA) as an agency of government is the organization responsible for the purchase, distribution and allocation of drugs and medical consumables across the state to benefiting health facilities and other government approved organizations in the state.

Others include the Director, Sales and Distribution of YODMA, Pharmacist Musa Dauda, Directors from YODMA and the State Ministry of Health as well as other Programme Officers of the Victims Support Fund (VSF in the North East.