Huriwa Calls For Jailing Of 'prophet' Odumeje For Serial Abuses Of The National Currency: 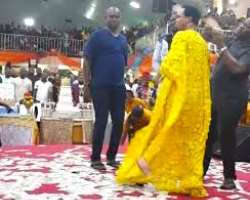 The Prominent Civil Rights Advocacy group-: HUMAN RIGHTS WRITERS ASSOCIATION OF NIGERIA (HURIWA) has asked the Central Bank of Nigeria Mr.Godwin Emefiele to order the arrest of the controversial Onitsha based maverick religious centre operator, the self proclaimed 'PROPHET Chukwuemeka Ohanaemere also known as ODUMEJE for his serial abuses of the Nigerian Naira and other denominations during his public ceremonies at his location in Onitsha.

HURIWA expressed consternation that despite the wanton and arbitrary disrespect and outright abuses of the Nigerian Naira and other denominations during religious rituals organised at the worship centre operated by the self proclaimed Prophet ODUMEJE in the Anambra State commercial capital of Onitsha which are usually transmitted live globally and aired on all social media platforms and watched by millions of viewers, the National institution charged with ensuring that the Naira is treated with courtesy, respect, veneration and admiration being the Central bank of Nigeria has failed to take concrete and verifiable steps to arrest and prosecute Prophet Chukwumeka Ohanaemere.

HURIWA has resolved to write officially to the Honourable Minister of Finance, the Governor of the Central Bank of Nigeria and Mr. President Muhammadu Buhari(GCFR) to implore them to stand up and defend the Naira and stop the global defacing of the Naira that takes place often and even telecast live globally to a an international audience just as these activities of throwing the Naira and other currencies on the floor of the Worship centre owned and operated by Prophet ODUMEJE has contributed significantly to bringing global opprobrium to our national currency and has seriously indicted the FEDERALGOVERNMENT of Nigeria as unwilling to defend the Naira even when the Constitution recognises that the law must not be the respecter of person or authority.

HURIWA stated that: " We have watched with disappointments as this self professed prophet Odumuje kept abusing and defacing The National currency and both The Police and The Central Bank of Nigeria have failed for many Months to stamp their authorities and prosecute these serial abusers of the national currency. We recall that in 2018 the Central Bank of Nigeria (CBN) organised a “CBN FAIR” in Calabar where it used the opportunity to create awareness and sensitise the public on the “appropriate use” of the Naira, Nigeria’s legal tender notes.

CBN, also “cautioned Nigerians against abusing the Naira notes, warning that anyone caught would risk six months imprisonment or pay a fine of N50,000.”

HURIWA aggress with an observer who wrote that the unwholesome practice of hawking, spraying of, dancing and matching on notes at social events significantly fuel the abuse and degradation of the notes.

HURIWA similarly endorses the position canvassed that the effect of these is that within a short time of issuance of mint notes by the CBN, the notes become an eye-sore and if not quickly withdrawn and reprinted, a national disgrace and embarrassment ensue.

HURIWA recalled that according to Section 21(3) of CBN Act 2007 “spraying of, dancing or matching on the Naira or any note issued by the Bank (CBN) during social occasions or otherwise howsoever shall constitute an abuse and defacing of the Naira or such note and shall be punishable under Sub-section 1 of this section.”

The same body of law, in Section 5 (i) went further to affirm as follows: “Matching” to include “spreading, scattering or littering of any surface with any Naira notes or coins and stepping thereon, regardless of the value, volume, occasion or intent” while in 5(ii) “Spraying” includes adorning, decorating or spraying anything or any person or any part of any person or the person of another with Naira notes or coins or sprinkling or sticking of Naira notes or coins in a similar manner regardless of the amount, occasion or the intent. Specifically, In Section 21(4), it is also a punishable offence for “any person to hawk, sell or otherwise trade in the Naira notes, coins or any other note issued by the Bank.”

HURIWA in a statement canvassing that steps be taken to stop the sensational abuses of the Naira by Prophet ODUMEJE recalled that the stated offences above are punishable under Sub-section 21(1) which provides, among other things that, a person “shall on conviction be liable to imprisonment for a term not less than six months or to a fine not less than N50,000 or to both such fine and imprisonment.”

HURIWA said: " We ask the CBN to ensure that the legal provisions that should have protected the Naira notes from abuse which are today being observed more in the breach than in compliance should be reversed. It is true as observed recently by a patriotic citizen that quite disappointingly, CBN and the security agencies have had their eyes glue-closed while the nation and its inhabitants suffer from preventable abuses of the national currency. Just as we reaffirm and reecho the fact as stated by an observer that as it were, the law against abuse of Naira has been in place for over a decade, yet the CBN is still at the stage of “awareness creation” and “sensitisation” of the citizens whereas religious houses are openly celebrating the abuses of the National currency which is a legal tender that ought to be respected by the citizens and everyone in Nigeria. This unfortunate trend of inertia and inaction by the CBN should be changed immediately. What other better way to do this than to use the Onitsha based religious comedian and self acclaimed prophet Mr. ODUMEJE as an example for others to stop abusing the Naira?"

HURIWA has decided to approach the President Muhammadu Buhari to charge him to compel all relevant agencies of government to begin the strict enforcement of the law.

" HURIWA recall that the Central Bank of Nigeria had resently warned Nigerians against abusing the naira notes. The apex bank said that anyone caught abusing the naira would be prosecuted and if convicted the person risked six months in jail fine of N50, 000.

An official of the Currency Operation Department of the CBN in Abuja, Mr. Samuel Shuaibu, disclosed this in Calabar, Cross River State, during the commencement of a ‘CBN Fair’ to sensitise campaign for residents in the state on the appropriate use of the naira".

HURIWA recalled that the CBN top shot Mr. Shuaibu said that the abuse of the naira was not in line with the CBN’s policy, adding that offenders would henceforth be arrested and prosecuted.

According to him, the awareness programme was aimed at sensitising the public on the need to accord respect to naira, online transfer system, how to identify fake currency notes, how to approach the CBN for complaints amongst others.He lamented the fact that Nigerians accord more respects to the American Dollar more than the naira, saying that Nigerians ought to appreciate and value the naira because it serves as a symbol of national identity."

HURIWA stated also that the CBN had affirmed that the naira has suffered abuse from a majority of Nigerians and asserted thus: "Today, we find some people spraying the naira in occasions, soiling it, writing on it, squeezing it while others are hawking it.The CBN spent a lot of money in the printing of this naira notes. We urge Nigerians to respect the naira and value it. Anyone caught abusing the naira will risk a jail term of six months or pay a fine of N50, 000.”

HURIWA therefore has asked the CBN to take action rather than continue in empty rhetorical campaigns that are at best meant to create the impression that the bank is working to protect the integrity of the national currency whereas these abuses are even being normalised through religious shows in which there are usually Naira rain all over the floor with the chief celebrant Prophet ODUMEJE dancing on top of these crispy notes.