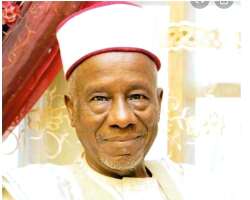 The Judge who annulled the June 12, 1993 presidential election in Nigeria, Justice Dahiru Saleh, is dead.

Saleh, when he annulled the election, was the Chief Judge of the Federal Capital Territory High Court.

He was scheduled for burial in Bauchi on Thursday (yesterday) evening. He held the traditional title of Mutawallen of Katagum Emirate in Bauchi.

The June 12, 1993 presidential election was adjudged as the freest and fairest in the history of the country.