Gov. El-Rufai Laments: 65 out of 169 Almajiris brought from Kano to Kaduna positive 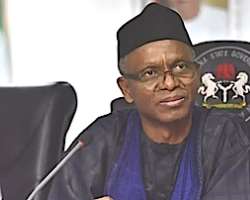 The Kaduna State Governor, Nasir El-Rufai, has said that 65 out of the 169 almajiris brought back to the state have tested positive for the Coronavirus Disease, Channels Television is reporting.

El-Rufai, who spoke with Channels TV on Wednesday, said: “We received 169 almajiris from Kano, of Kaduna State origin, and we immediately quarantined them because of the situation that we are aware of in Kano.

El-Rufai said the Northern States Governors’ Forum had taken a decision at a meeting three weeks ago that they would put a stop to the almajiri system in the region.

He said: “What we agreed on as governors is that each state governor will take delivery of these almajiris and return them to their parents and ensure that they go to school.”

He said Kaduna State had repatriated over 30,000 almajiris to their states.

He said: “We have repatriated over 30,000 who are from other states in the North back to their states and we are happy to receive any almajiri from any state of the federation that is indigenous to Kaduna State.

“The only thing we request is that they should be brought in officially by the state government.

“They should be brought to the Kaduna State Government on a bilateral basis, so that we know when they are coming, we can prepare to receive them, we test them and so on.”